Anobody out there play in the valley? Yeah? Who for? Show yourselves!

You're just asking for trouble with that one TR... I don't think many FVSL players can click a mouse button, never mind kick a ball straight.

Prediction in your poll: an emphatic No!

Can I bar you from the FVSL thread with my new moderator status?

Some of us can kick a ball straight......sometimes.

Why don't you try it and see what the outcome is? come on... pansie valleyboy...

I'm sorry, I got no comeback for that

TheRob,
I just logged in to the new take the piss. I know there are a few Valley players who check out this site, most like myself do more lurking than posting. I play for PoCo City Dominion. What team do you play for? Hopefully we'll get more valley players posting here this year.

The goal is to get enough FVSL guys here, so we can take this place over. I'm tired of being bullied by these VMSL juice monkies.

Anyhow, I play for GEUSC. Four games in net in Premier last year, and the rest at fullback in div 2. This year I'll be playing reserve. Will you be playing for Dominion again?

Hey didn't Dominion run away with the prestigious FVSL Premier Title and then proceed to get walloped by the oldest team in the VMSL in the first round of the provincials?

Wasn't Poco City also the club that had the best ad campain in BC Soccer? "Play with us 'cause we've got great tits."

I'm going to assume this is you SH. How did the tryouts go on Sunday? How many keepers did you have come out? Throw your scraps our way would you? We need a keeper in a bad way.

I got to say, those are just really nice breasts......really nice.

You know, those really are nice. Sure grow them big out in the valley!

Of course you know, all the Pocomo gals will have a few more stares at tournaments and such, as we try to ascertain who those belong to. Of course I will be very tactful in the manner I do this.

Prediction in your poll: an emphatic No!
Click to expand...

As of this moment the Valley leads. Pansie valley boys my arse.

yeah, so what poco team is that?! Nice freakin rack. 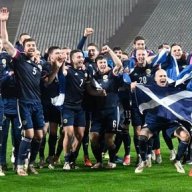 Having played in both the VMSL and FVSL, I would say that if run properly today, the boys in the Valley would be able to compete equally with that of the Vancouver Lads.

Historically the Valley has spawned some great players and excellent teams. Equal or better to that of the Vancouver league.
The old Langley Bursatto(spelling) comes to mind.

After all, that is what the two leagues are trying to accomplish now. It is all about making the biggest, baddest, bastards in all the Land and the best teams anywhere come from both the VSML and FVSL. A more competive league with many, many more teams looks pretty good to me.

I am hoping the over 30's from the Valley cross paths with the Vancouver league more often this year. The two league are talking about it. We will be always ready to kick some VSML over 30 ass.

Regs wrote in the VMSL thread:

I'd like to know the same about the valley teams. Who's got who, and who's got what. Anybody going in any tourneys?

GEUSC needs a couple of keepers. If anyone is interested, send me a PM. Or e-mail me here.

GEUSC is also in need of Tim Robbins...

What the hell is a GEUSC?

GEUSC is also in need of Tim Robbins...
Click to expand...

You mean the guy from Shawshank? Does he play net?

I've been a Lurker up until now, but I think it is great to have a forum for the FVSL. I'm in agreement with you on the quality of play in the FVSL. As a former VMSL player, I also held a low opinion towards the FVSL. I came back to the FVSL 3 seasons ago after I moved from New West to Cloverdale and started playing in div 1c (now known as div 3). Having played in the 1st, 2nd, and even 3rd div in VMSL, I thought FVSL 1c would be easier. Instead, I found the level quite competitive, and the caliber of players fairly decent- comparable to VMSL div 2. Over the past 10 years, the league has done a good job in bringing the quality up. I also think it helps that over the years there have been a lot of defectors from VMSL changing because they've moved out to the burbs.

I'm going to be passing on this website addy to the team, and encourage them to check out the FVSL thread. I was disappointed to see the FVSL Web forum get pulled, because it was sparking some great banter and very worthwhile discussion. It would be great to get something like that going again.