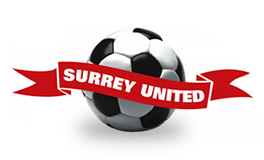 In their brief tenure as a VMSL club, Surrey United has made quite a name for themselves on both the local and provincial level. Just five years removed from being the class of the Fraser Valley, Surrey has matched their FVSL success by achieving the ultimate goal for amateur soccer players in British Columbia – a berth in the National Club Championships.

The Sixth Stud caught up with Club President and men’s premier coach Martin Foden a short while before the team took off (Tuesday, October 07, 2003, at 5am) for Quebec City, hosts of the 2003 Challenge Cup.

To understand the current level of success the club has attained, attention must be paid to the club’s history, and the executive decision to make the switch from FVSL to VMSL. From the beginning, Foden had laid out a five-year game plan that the club has met and in some ways, exceeded.

“We developed a five year game plan that ranged from a survival program in the first year to a graduated improvement each year until such times as we would be able to compete for the major awards in the league and indeed the province,” Foden explained.

“I personally spent many hours recruiting the right type of players that would provide us with the right blend of experience and leadership and youth and enthusiasm. I knew whom I wanted and I told them the details of the plan and the vast majority of the players agreed to come and give it a try. For the most part we are right on track with our plan as we go to the Nationals next week but the real bonus is that we currently have some great young players coming through the ranks.”

What started out as a survival program soon turned into a model of success. The team avoided relegation early and made its mark as a determined and hard-working side. Gradually, improvements were made in terms of personnel that would create the framework for the Provincial Championship squad they carry today.

Former Metro-Ford ‘keeper Drew Smiley would become the team’s starting goalie; midfielders Cory Janzen and Todd Stauber would later be brought into the fray as well. The ability to draw quality players is one of the staples of a successful side – call it the Los Angeles Laker effect – and United has seen their recent form draw a variety of quality players their way.

“You must look to raise the bar each season because if you stand still you will certainly regress,” Foden said.

“Our players are challenged to win/retain a starting spot, every practice, every game, every season and all our players are aware that is the mandate of our club and we do not intend to change that philosophy.”

A challenge the Surrey squad faced outside of the battles for starting spots was a brewing rivalry with Westside FC, who since the 1998-1999 season have won (deep breath) five League Championships, three Imperial Cups, one Provincial Championship, one 2nd Place Finish at the Club Nationals, two Golden Boots and three VMSL MVPs. It was the same Westside team who had knocked Surrey out of the 2001 and 2002 Provincial Cups, including a heartbreaking double-overtime thriller in the 2002 Cup playdown.

“I am not sure it is so much a rivalry but more so a tremendous amount of respect that we hold for the Westside organization, its coaches and players and what they have achieved together especially over the last ten years,” Foden explained.

“Definitely their record represents a very aggressive benchmark for any team to emulate but we have always been more focused on achieving our own goals rather than what any one else may establish as a benchmark for us.”

If there was a psychological hurdle to jump en route to a Provincial Championship, Surrey’s would have appeared in the form of Westside. The two teams did collide in this year’s Provincial playdowns, with Surrey emerging the victor. Foden reminisced on the significance of the win, saying “it was a great to beat them last year as it was not only a huge psychological barrier to overcome, but it also provided us with a great confidence boost on the way to winning the title.”

Foden and his players are now staring down what is one of the most intense and cutthroat competitions in Canadian club soccer.

The group format used by the CSA essentially presents each team with a “lose and you’re done” ultimatum which, for some teams, means the tournament can be over as quickly as it began. The timing of this tournament has always been peculiar for BC-based squads, who already are in swing with their new league campaign before heading off to represent a Province they conquered a season earlier.

What makes things even more difficult for United is they must bear the cross of last year’s Provincial reps Victoria Gorge, who’s utter tank-job at the last national tournament left B.C. with a 10th-place ranking heading into 2003.

Foden refuses to let any of these aforementioned scenarios become worrying points for his squad, however, insisting that his team is well-prepared for anything this national tournament may throw at them.

“While it is always good to know about your opponents strengths and weaknesses I think a lot of people overvalue that aspect. I am certain that those teams will not be significantly better than the likes of Westside, Pegasus, Inter etc. These are all quality teams that we all face each and every week and in our case have done so for the past five years,” he said.

“Gorge's positioning last year was unfortunate but it will not impact us at all. It will not be a crutch for us to lean on if we don't do well. We simply need to keep the focus on our team. In the provincials last year I felt that we beat the three best teams in the tournament to win the title and I am confident that we are capable of doing the same at the nationals if we are properly focused.”

Surrey United will kick off the National Club Championships next week. We all here at TTP wish them the best of luck and encourage Dave Hleucka to post frequent updates on his snazzy new laptop computer.
Reactions: Regs