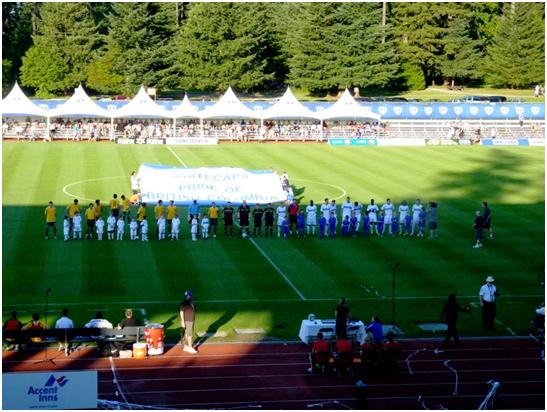 Yes, its time to remember that white is the color, and soccer is the game. For 14 fun-filled evenings at Swanguard this summer, the Whitecaps will be taking on what the MLS either doesn’t want or can’t obtain a work permit for, once against establishing themselves as one of the three closest things North America has to a striving professional football club. No, Calgary doesn’t count.

I can’t get geeked about Whitecaps soccer. For one, they play in a League with a few teams whose financial management would make the bookkeepers at Leeds United look downright savvy. The Whitecaps basically exist within a developmental pyramid developed by the United Soccer Leagues. So they’re stuck in this sort of vortex where the majority of their competition is either structured to develop players, or struggling to get by as a semi-professional team in a decidedly non-soccer market. And I’m not even sure where the Whitecaps franchise falls in that regard. I have no idea what the reaction to A-League teams in El Paso, Cincinnati and Indiana is, but gathering by the Pre-Season prognosis for Cincinnati (courtesy of a-league.com) - “many out there aren't even entirely sure this club will make it through the opener let alone the season. Personally, I'll be a little surprised if they win more than one or two games. The San Andreas Fault looks less shaky than the lineup that could be on the field for the Riverhawks but, hey, at least some of these kids will get a look at what A-League soccer is like” – it doesn’t look promising. Vancouver fans will be sitting on pins and needles to see if Cincy makes it through to their July 27th date versus the Caps at Swanguard.

I suppose the interstate rivalry with Seattle makes for some decent atmosphere, but given the massive overhaul A-League rosters undergo from year-to-year, there is little in the way of drawing power based on familiarity. It becomes remarkably hard to create some sort of stir, excitement or derby-like intensity for matches against teams that are virtual unknowns. You’d have to be a pretty keen follower of Division II soccer in the States to be familiar with most of the Whitecaps opponents on any given night. Hell, the turnover for franchises is downright idiotic. Since 2000, the league has lost San Diego, Bay Area, Orange County, Tennessee, Long Island, Boston, Connecticut, Hershey, Raleigh, Pittsburgh and Atlanta as franchises – three of which were frequent visitors to Vancouver via their West-Coast ties. Doesn’t speak volumes for continuity of competition.

One of the avenues the team has yet to explore is creating some sort of competition between the Canadian teams in the A-League for some bragging rights/supremacy title. The Voyageurs, the Canadian National Soccer Supporters Club, have their own independent “Voyageur Cup”, which actually invites all four teams to get involved (seemingly by playing their regular-season games against each other and letting the Voyageurs do everything else). You used to see as much in the NBA with the Vancouver Grizzlies and Toronto Raptors competing for the now-defunct Naismith Cup, one of the few games that could awake Vancouver basketball fans from their perpetual mid-game slumber. Whether you liked basketball or not, you were probably cognizant of the east-west rivalry that is engrained in Canadian society. When you’re attacking a fan base that has little to look forward to in the way of meaningful games, attaching some artificial stimulant onto them can create the stir needed to get crowds involved. Wouldn’t a small-scale Canadian National Championship, if handled properly, be an entertaining pre-season draw? Four teams in a semifinal/final/consolation-match setting, two games each max, have it done in a week-end. Montreal and Toronto have money at their disposal - get them to fly out here. Calgary can take a bus. It would be an interesting competition and would set some sort of tone and familiarity between the sides for the regular season. It would also show some initiative by the club. As it stands, the big preseason kickoff at the moment is the Whitecaps playing against a couple of developmental teams and Portland at Rotary Stadium in Abbotsford – the “Canterbury Cup”. The Canterbury Cup is great entertainment for Abbotsford residents, but so is backyard wrestling and setting garbage cans on fire. I’m not sure I really follow the marketing strategy behind this one. It does little to draw in local support, which is probably more crucial given all the home games are played in Burnaby.

As a franchise, the Whitecaps have marginal star power. The most exciting thing to happen to the team in the last 10 years was having Peter Beardsley come out of retirement last season to play a game, and even that was sullied by the fact that his teammates were way below his level and the Caps got their asses handed to them for most of the night by an MLS reserve team. Beardsley has been to the top of the football mountain, and for one fateful evening he climbed down to realize that the current Whitecaps are a collection of the most talented/cost effective players within the city lines. While I can’t slag players for choosing to play recreationally during the off-season, you tell me what kind of sales pitch you use to convince someone to come out and pay to see Jeff Clarke, Jeff Skinner, Mike Franks and Tirnan King play soccer, when you could have witnessed all of them playing in the VMSL 1st division from September to March. For free. This is not a slight against the players – they’re all talented and skillful footballers – it just questions the level of ‘professionalism’ you’re really witnessing on the pitch.

To compensate for this, the Caps trot in the yearly gaggle of training camp prospects whose lone footballing credential is that they were born outside of North America. No offense to the guys who came over from Newcastle to have a go at the A-League, but leaving England to come play soccer in Canada is equivalent to Canadian kids going over to England to play hockey. Still chasing the dream. This isn’t the NASL, and leaving St. James for the friendly facilities at the Burnaby Lake field turf complex really can’t be seen as a move to further one’s career. My guess is that Beardo instructed the lads to take a vacation to a beautiful city for the summer, get paid a bit to play against some average competition, and have fun with the whole experience. Unless Robson has suddenly become enamored with the recent performances Canadians have had on the international scene, I can’t envision him encouraging two of their youth players to have a go at the American second division for a summer to hone their skills.

If one of these “internationals” does happen to make a splash with Vancouver, guess what their MO is after that? Get the hell out of dodge. The Caps simply don’t have the money handy to keep superstars (that’s a relative term) in town, assuming one or two develop to that level. So, for the supportive fan base, they are treated to the cold reality that if a player succeeds at this level, their goal will be to leave and play elsewhere for more cash and better exposure. That Sebrango fella didn’t waste much time hopping out of Vancouver once he saw the money wasn’t forthcoming for his, admittedly, impressive performance a few summers back. The flipside of this coin is the Darren Tilley Experience, one where you pay a truckload of cash up front for a proven ‘star’, only to realize that he loses most of his drive and desire when he’s not forced to fight for a paycheck. A team with the financial instability like the Whitecaps can’t really afford to take flyers on big-ticket (relative, always relative) players who fail to produce the desired results. Stadnyk tried to do as much with Tilley, Holness and Titus – all of which netted him another mid-round playoff exit and a cold slap of reality that running this team is lousy business. Next year they were gone, and another minor rebuilding phase began in both the front office and on the field. It’ll be interesting to see what happens with this big Liberian striker, Musa Shannon, this season. If he rips the A-League a new asshole, he’ll be looking for big coin in the off-season, something more lucrative than accommodations in a one-bedroom suite at the Slumber Lodge on Kingsway and 50% off all purchases over $200 at Soccer Cents. What happens then?

This is the conundrum the Whitecaps will see themselves in for the foreseeable future. The team should be applauded for clinging to life on financial death row for so long, but the fact remains that they’re treading water more than pushing for the edge of shore. They’ve carved a niche within the youth soccer market, but in all honesty, for the team to make any significant financial gain they need to gain a strong tie to an adult fan base, which in turn equates to corporate sponsorship, increased season ticket sales and respectability within a semi-knowledgeable soccer community. As it stands, that’s a long ways away from happening.
Reactions: Regs