Anyone following the women qualifying rounds for the olympics? Mexico is up 1-0 at the half...keep us posted Regs, or whomever may be home right now...
Below is the outstanding coverage being posted on the bcsoccerweb sight

Second half
Halftime
Two minutes of injury time is added.
39:00 - Canadian header off a free kick sails over the crossbar.
27:00 - Latham drives up the field and is stopped by a dual effort by Mexico's defence.
25:00 - Mexio's Dominguez opens the scoreing on a single effort past the Canadian defence for a shot past LeBlanc.
12:00 - Hooper gets behind the Mexican defence gets a soft shot on net over the crossbar.
9:00 - Mexican long ball is intercepted by LeBlanc.
8:00 - Four Mexican's get close to Canada's net where a shot is deflected by LeBlanc.
5:00 - Latham takes possesion of the ball deep right of the net where Molina misshandled the ball. Latham's shot to the net is intercepted by the Mexican's defense.
Kick off
This game will be broadcast LIVE on Rogers Sportsnet.
Click to expand...

60:00 - Mexico takes a 2 goal lead with another by Dominguez with a right footed blast into the top right corner from eight yards out.
Click to expand...

The Olympics are over-rated anyways.

I feel for the old girls. Sad result after the last world cup. Retirement may be in the books for some.
B

Mexico were by far the better team today.

Well they passed the ball.

Canada was in the habit of playing desperation soccer right from the opening whistle. It got them very few chances. Their goal actually came from a bit of possesion play (3-4 good passes).

I really don't know why Canada went with the 4-4-2 formation today (or ever). Their style of play is much better suited to a 4-0-6! Every time their back line receives the ball they take 4 players out of the game by humping and hoping

Full marks to Mexico though, apparently they played the US in a 2-0 loss which is quite a feat considering how consistently strong the US have been. Let's hope they can give the US a run in the final.

Canada has never lost to a South American country and now (according to dumb and dumberer - the commentators) Mexico is the first to beat them! I am sure once the others catch on to the one dimensional style of play the Canada has they will all be able to beat us in the next few months.

I watched the game in utter frustration and could not agree more with Brave-fart! As for a system, there isn't one! The whole thing is awful from the field to the media (dumb and dumber).

I was really hoping that Canada would qualify for Athens. The system of play is shocking , if you can call it a system. The whole program needs to be revamped, both women's and men's. The CSA has to find alot more money to spend on our players and programs to provide our so called top class athletes the opportunity to perform at a top level. This is not just true for soccer but every athlete in Canada.

SC, I think alot of these gals need to hang'em up!

5bigtoes said:
SC, I think alot of these gals need to hang'em up!
Click to expand...

I would rather see them finish in the Olympics. I think things will pick up in 3 1/2 years. We have some quality players coming through, although, the coaching staff will have to keep up

I went to that Canada/Mexico friendly last year at Swanguard, and we whipped them 7, 8, 9-buzz or something. Granted, it was a mean nothing game, but really . . . what a turn-about. 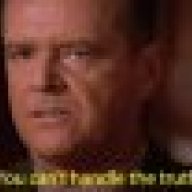 Location
out in left field

What a horrible result from gals capable of so much more..to bad the coach can't see what he's really got...of course that's the whole problem with Canadian soccer...the knobs running the CSA are blind and really love the old style of english soccer..and I mean OLD style.The game across the water has changed twofold and we're still in the dark ages.
My two cents worth...about what the game was worth yesterday.

I didn't see the Mexico game but when I was watching the game before I remember thinking how stupid it was to be playing that long ball game up to their forwards who were clearly dominating the (totally inferior) opposition: so what if they can beat mediocre teams 8-0, that game doesn't work against the top 10 teams in the world.

I really think they have the talent to play a more composed/controlled game which would then make the odd direct/breakout so much more affective. Pellerud's an ass.

Actually, Peter, he's an ass with a contract extension. It also means that he's an ass who knows how to kiss 'em and play the political games.

Sorry folks. The Canadian women's team wasn't as good as we thought they were. Yes, there are some very good, strong, and skilled players, but do they play together? No. Pellerud's lack of a system works great for Scandinavian teams who can beat the opposition on size, fitness, and individual skill - they play exactly the same way as the men's teams from that part of the world do - but when his coaching "style" runs head-first into a passing team, it goes belly-up.

What's happened is that we've used up our head-start. The rest of the female soccer-playing world has caught up, primarily with better coaching. The players aren't any better (with a few exceptions); they're just better coached. The Canadian women's team needs a real coach - someone who has played the game and can adapt to an opposition that changes tactics on the field; not a doofus who coaches out of an outdated textbook that doesn't fit his players or the style of the opposition.

If I knew it would make a difference, I'd demand Charmaine as head coach of the women's program. She's a sparkplug, and easily the one player on the team that all the others obviously respect. Unfortunately for her, there are a few things standing in her way:

1) She's already got herself in trouble for criticizing the morons who run the CSA;
2) Pellerud got a contract extension for the fluke performance last year;
3) it makes too much sense to have a female coach for a women's team.....

and everybody knows what happens to you when you start making too much sense.

On the bright side, I still have 3 little girls on my house-league team who want to play like Christine Sinclair when they grow up. That, more than anything else, gives me encouragement.

stew said:
If I knew it would make a difference, I'd demand Charmaine as head coach of the women's program. She's a sparkplug, and easily the one player on the team that all the others obviously respect. Unfortunately for her, there are a few things standing in her way:

1) She's already got herself in trouble for criticizing the morons who run the CSA;
2) Pellerud got a contract extension for the fluke performance last year;
3) it makes too much sense to have a female coach for a women's team.....
Click to expand...

Why Charmaine, has she coached anywhere before, and won. She is a great player, and has been the best player in Canadian womens soccer for years and years, but that does not make her a good coach, and for sure not the National team coach.
Pellerud once said to me and other coaches at a National Championship, that he was looking for "extreme players, with extreme speed, extreme jumping ability and extreme kicking ability." He liked saying the work "Extreme" for some reason. I took it that he wanted players with raw talents and physical ability, and he would turn them into players.
The only problem is the system he has used only works against weak teams, that don't have the skill or confidence to play. So the long balls are often a hope and a prayer as a form of attack. He must take these young girls with all the physical ability and form them into well rounded soccer players, not just robots kicking and running straight up the pitch.

Lastly, I was coaching the other night, and on the other pitch, I say a coach working with a U-15 or U-16 girls team. He was working with one girl on trapping the ball. The only problem was, he was coaching her on how to trap the ball between the pitch and her shin, while moving forward. Now I have not played out in a long time, but is this an effective way to trap the ball, perhaps that is part of the problem with the game in this country.

HOS, you need to step up and take over coaching the Dragoons this year

SC said:
HOS, you need to step up and take over coaching the Dragoons this year
Click to expand...

That is some offer, the most talented team in the AMSL, but the only problem is motivating the players week in and week out, well that and all the pints and geegers.

I ave been hearing the new slogan for 2004, the "Can you ROAR for just ONE More in 2004?".
If the team will play Extreme Soccer, then I will take over and lead the Mighty Hairy Blue Dragons to the long forgotten Cup that keeper has found.