Gatorade Team of the Week (Week 19)

The Gatorade Team of the Week for the 19th week of the Canadian Premier League action in 2021, brought to you by Kristian Jack and OneSoccer's Oliver Platt. 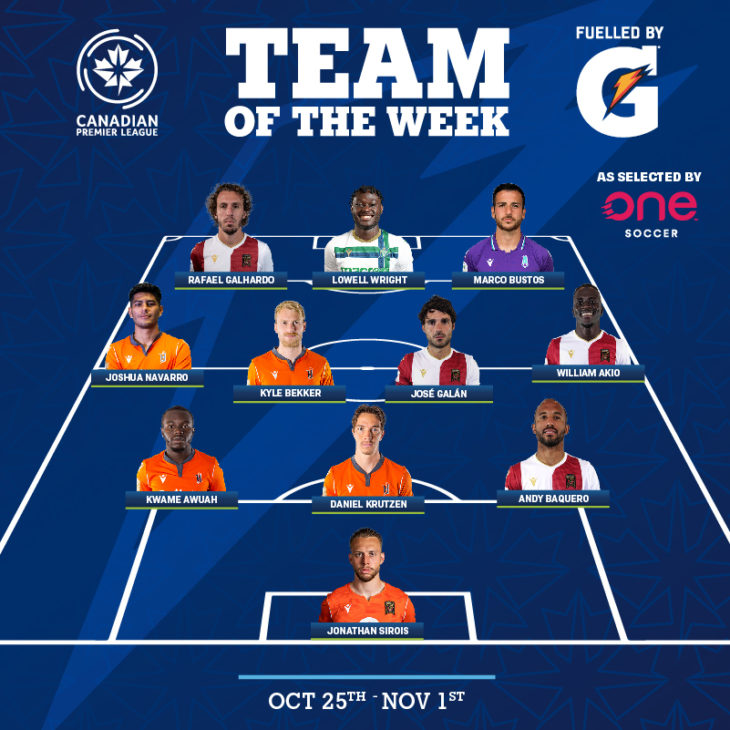 Jonathan Sirois (Valour FC) Valour’s netminder was fantastic again this week, completing a clean sheet in a dominant display against HFX Wanderers midweek and then showing why he is a major pillar to Valour's success on Saturday in a tremendous 4-2 win over Cavalry. No team has ever scored four goals against the Cavs but it was the work of Sirois early in the game that allowed the comeback to be completed, making a number of crucial saves including two (one from the spot) on prolific striker Joe Mason.

Andy Baquero (Valour FC) No one had more tackles or gained more possession for Valour than the Cuban right back who was excellent against Cavalry and Halifax as Valour won back-to-back games home and away for the first time ever. The 27-year-old has been a steady influence all season on their backline, reading the game really well and becoming a much-needed consistent piece for boss Phil Dos Santos. Daniel Krutzen (Forge FC) It is no coincidence that Forge have found another gear in the homestretch of the season at the same time Krutzen has found a new level, following an eight game run when he was missing through injury. The 25-year-old has played every minute of the last 13 CPL matches, allowing Forge to claim 25 points during that span, and become favourites to finish the regular season first overall. Krutzen was a master in defence against the Wanderers, showing his usual calmness in possession where he completed a team-high 81 successful passes. Kwame Awuah (Forge FC) The big beneficiary of Krutzen's distribution is his defensive partner, Kwame Awuah, who received 19 of those 81 passes and had a fantastic week on Forge's left flank. Arguably the best left back in the league, Awuah was tremendous against MLS side CF Montreal in midweek cup action and handled Halifax's threat in the second half as the visitors changed personnel and system to mount a challenge.

William Akio (Valour FC) In a week where many attackers flourished in the CPL, we place Akio in a wide right position where he has played regularly for Valour. Akio has been fantastic under Phil Dos Santos, starting every game under the new boss and finding the back of the net on a regular basis. His spectacular brace in Calgary on Saturday made it five for the month of October as he scored against Forge, Pacific, Halifax and Cavalry. Jose Galan (Valour FC) It has taken the Spanish veteran most of the season to get to full fitness but after nine substitute appearances in a row, where he never played more than 26 minutes in a match, he was finally given a chance to start this week and did so in back-to-back games with a real midfield masterclass. Both games were very different, against Halifax he had a lot of time and ability to dictate the speed of the game, while at Cavalry it was far more disjoined but on both occasions it was clear that Galan is an elegant player that treasures the ball and combines well with similar technical players. Kyle Bekker (Forge FC) Another week, another nod in the Gatorade Team of the Week for arguably the league's best player. Bekker led a fantastic press against CF Montreal in cup action and then sat deeper as a true number six against Halifax in league action and was just as impactful from a deeper position. Joshua Navarro (Forge FC) The Costa Rican attacker opened his account in the CPL in style, consistently finding the most dangerous areas and evading his markers. He was rewarded with two good goals, and he came quite close to completing the hat-trick after a fantastic opening half against Halifax. Navarro reads the game well, anticipates plays and finds crucial space that allows him to be efficient in front of goal. At a time when rotation was needed, he adds another element to a team already boasting the likes of Mo Babouli, Omar Browne and Emery Welshman in attacking areas.

Marco Bustos (Pacific FC) Last week's CPL player of the week returns to the Gatorade Team of the Week after a fine individual showing in his team's 5-1 thumping of FC Edmonton. Bustos bagged a brace and was a menace all game and was good again on the weekend versus York United in a battle against the impressive Max Ferrari. The return to top form and fitness for Bustos comes at an optimal time for the club ahead of monumental week. Lowell Wright (York United) The 18-year-old made an immediate impact at Pacific on Saturday, coming off the bench to create one goal and score the winner, a wonderful individual effort. “I thought Lowell was great when he came on,” said boss Jimmy Brennan. “He’s such a big body, he’s got an eye for goal, he can hold up play, he works. His work ethic’s getting better and better every week. I was happy for him to get his goal.” “Definitely happy with the performance that I put up, but more happy that the team got the three points today,” added Wright. Rafael Galhardo (Valour FC) Much of Valour's form has come from key players getting fit at the right time and in Galhardo we are now starting to see the talent that once saw Anderlecht of Belgium spend nine figures on the player. The Brazilian is playing with a smile on his face and is a cruel cog in how this vibrant attacking team can flourish in transition.