Confessions Of An Adrenaline Junkie 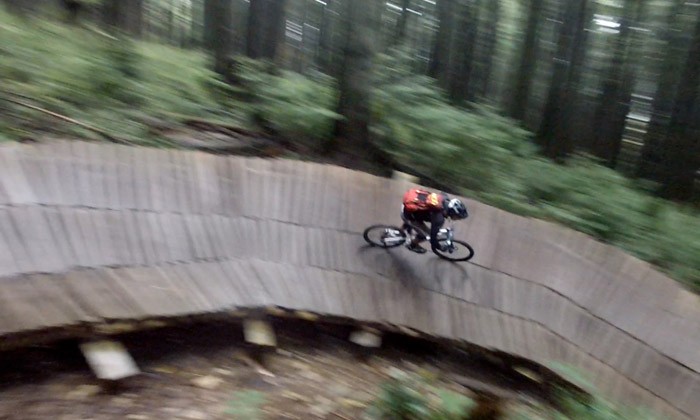 These words, heard daily at ski hills everywhere, are the kiss of death for the adrenaline junkie. The words are common at local mountains such as Seymour Mountain, Cypress Mountain, Grouse, world famous Whistler / Blackcomb, and every other ski resort destination from here to France. These words are as common at the base of the Whistler Mountain Bike Park, the North Shore, and other popular mountain bike hot spots.

As a frequent worshiper at “Dirt Church”, my sanctuary is the vast trail network of the North Shore Mountains. In the mountain bike world, the North Shore is synonymous with “Freeride” style mountain biking. Freeride is a loosely termed definition for the style of riding that has developed in the trails on the North Shore of Vancouver. It is a hybrid of downhill and cross-country riding. Basically, as riders progressed to riding steeper and steeper sections of the mountain, they started building their own man-made obstacles within the confines of the terrain to allow them to traverse what would otherwise be un-rideable. Fallen trees became part of the trail, rather than obstacles. Rock faces became lines, another part of the path. Cliff drop offs became transfers, joining one section of a run with another. Shore style of riding and expert-only trails has since expanded to the rest of British Columbia. Simply put, we live in the middle of the hotbed.

In a nutshell, the North Shore is to freeriders:


The North Shore draws the best riders in the world to bask in it’s beauty, difficulty, and cruelty. On any given ride, the Shore can be your best mistress, or most hateful ex-wife. She’s a siren…she draws us in, and we can’t pull away. She’s our solitude and escape. She’s our best friend. She’s that bitch, Lucy, pulling away the football. 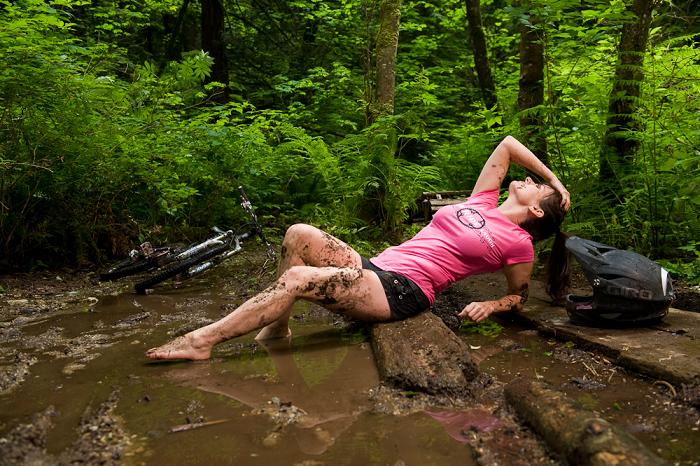 Freeriding, like many adrenaline fuelled sports, offers a different escape, a work in progress if you will, that most outside the sport have difficulty grasping. More often than not, these sports’ athletes are referred to as “crazy”, “stupid”, or even “suicidal” for taking part in an endeavor that claims more than it’s fair share of horrific injuries.

What compels the adrenaline junkie? It’s difficult to say, because everyone has his own reasons for pushing the envelope. But, common amongst all AJs is the feeling you get when you’re in the “Zone”. Once you’re trapped in the Zone, it’s difficult to escape.

When you’re in the Zone, you can’t be beat. You’re the master of the trail, maneuver the stunts flawlessly, and are the fastest rider on the mountain. Like when a surfer is “one with the board” when riding a big wave, a freerider is “one with the bike” when descending a tough, technical trail. The same feeling that drives a freerider to ride a rock face is the same feeling that compels divers to swim with sharks, skiers and snowboarders to drop off cliffs, and rock climbers to “free scale”. It’s the rush of adrenaline one feels while pulling off a difficult maneuver. It’s an addictive sensation; if you are lucky enough to pull of the maneuver unscarred, you only want to do it again.

At the height of my Zone is the moment in time between getting air-born off a drop, and making contact with the landing transition. At this moment, time slows down. If the take-off is smooth, a rider can simply hang back, hold on and let the bike complete the drop. Great riders can take the time to pull-off a mid-air trick. If the takeoff is poor, the rider will either find the time to correct the drop mid-air, or start looking for a place to crash.

The bigger the drop, the longer is the climax of the Zone. With the exception of the worst results, the feeling of time slowing down is so exhilarating that it will invariably stay with the rider. This is what keeps the AJ coming back for more.

The “One More” sensation is the most common cause of injury to anyone who participates in “extreme” sports that have a reasonably high degree of difficulty and risk. Success fuels confidence and courage, and the need to go back and do it again.

At some point during the day, the AJ crosses the line from “increasing returns” to “decreasing returns”. He has made enough runs through the day to have a feel for the terrain, is ultra-confident on the extreme sections, and is still looking to crank it up a notch. It is at this same point that muscle fatigue will abruptly set in, just as the AJ is in the Zone. Arms turn from finely tuned pistons to spaghetti. Legs become jelly. The bike, once an extension of the AJ’s body, becomes a cancer, determined to fail. The AJ approaches and commits to a drop he has done four or five times that day, but during take off, something happens; the body forgets its role.

Sometimes, great riders will huck off a big drop, and coast one handed through the air, before finding his grips again for the landing 15 feet lower. When the over-confident AJ does it unintentionally, the results can be frightening. This is when you start planning your crash…if you’re lucky. Sometimes it does the planning for you.

It’s troubling to be yanked so violently out of the Zone. Like when a surfer loses his board while riding a tube, you become a rag doll in armor. Hopefully, there aren’t any trees in your path; if there is, you hope that somehow it’ll give. The problem with strong Canadian firs is that they don’t generally flex when a dumb freeriders smack into them doing Mach 5. When it’s all over with, you sit there, and take inventory. Legs? Check. Torso? A little blood, probably from being impaled by a tree branch, but OK. Arms? Left shoulder hurts like hell, and is hanging a little low. Collarbone seems fine…must be a separation. Head? Thank God for full-face helmets.

Pulling the rig over to the side of the trail, you count your blessing once again. What the hell happened? You owned that section all day! You look up at the drop; it looks much bigger looking up than it does looking down it…far more intimidating than on the approach. Then you realize- you don’t own that drop, it owns you. The drop is your Daddy.

After a 10-minute rest, and after turning down numerous offers from fellow riders to call up the ambulance, you carry on under your own power.

Broken, battered, and defeated, the AJ makes his way to the base, and heads for the pub. Here, he joins other like-minded AJs, finishing off a great day on the hill with a few buckets of Corona and some grub. Big fish stories filter in, and it becomes evident that most riders had their day ended by either mechanical problems, fatigue induced crashes, or both. The rest are still up on the hill, finishing one more run. A bag of ice and bottomless beer help ease the pain. The tales of heroics, combined with alcohol consumption, serve the purpose of re-building the confidence level of the crest fallen AJ.

As the story telling and banter continue on into the evening, the AJ is convinced of two things: he dominated the day, and he will be back.

The Zone calls.
Reactions: Rangerforever and Regs
About author