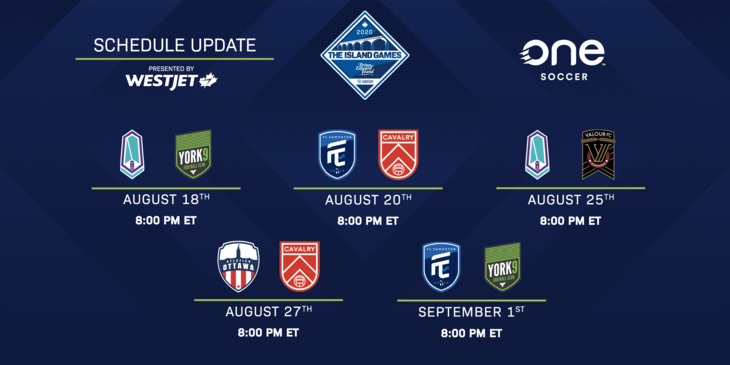 SCHEDULE UPDATE CANADIAN PREMIER LEAGUE ISLAND GAMES 2020 SCHEDULE PRESENTED BY WESTJET August 16, 2020 – On Thursday August 13, the league unveiled Canada’s first virtual stadium for a professional sporting competition in Canada. We are proud to be showcasing our new virtual and augmented reality technology in partnership with OneSoccer for the Canadian Premier League's Island Games . The results of our technology and production quality testing met our elevated expectations and we are pleased with the feedback from our fans and supporters from our opening match. As a result we are happy to announce a schedule change for all Tuesday and Thursday matches (starting on Tuesday, August 18 with the Pacific FC vs York9 FC match) to an evening match-up at 8:00pm ET / 9:00pm AT. Schedule by Club HFX Wanderers Atlético Ottawa York9 FC Forge FC Valour FC FC Edmonton Cavalry FC Pacific FC Link to full league schedule: www.canpl.ca/schedule About The Island Games Charlottetown Prince Edward Island will be the host location for the Canadian Premier League’s 2020 season. The Island Games will commence on Thursday, August 13 with all eight (8) Canadian Premier League Clubs participating: HFX Wanderers FC, Atlético Ottawa, York9 FC, Forge FC, Valour FC, FC Edmonton, Cavalry FC and Pacific FC. All matches will be played at the University of Prince Edward Island (UPEI) FIFA quality Turf Field. About the Canadian Premier League Canadian Premier League (CPL) is Canada’s professional men’s soccer league that debuted on April 27, 2019. Headquartered in Toronto, ON, the Canadian Premier League features eight clubs from coast-to-coast. For updates and more information on the CPL, a league for Canadians by Canadians, visit CanPL.ca. Connect with us on Twitter: @CPLsoccer and #CanPL Media Contact: Micki Benedetti micki.benedetti@canpl.ca