I never knew Bon Scott was the one who played the pipes in that song.
Learn a new thing every day - Awesome.

And yeah, that has Brownie written all over it.

So much awesomeness in this one

Regs said:
So much awesomeness in this one

Odd - I don't think I saw any Messi goals

That is a lot of key changes as well as flat/sharp here and there, never mind the 13:7 time signature that also changed. Pianist is a God.

Could have been 12 o 13. I really hope he comes to the EPL next season

That kid is a stud. Been watching him play all year and the guy knows how to score goals.

When I lived in Calgary, I played for the Chinooks. A guy originally from the Caribbean came out to play for us. You could tell by his face that he had been through some heavy stuff (we were mid 20s and his face looked like he was in his 50s . . . but not healthy like us). One night after practice, we were at a bar and he told me the story. He worked construction. One Thursday after work, he was out with some of the guys and one of them gave him some crack. He didn't even know what it was. He said the first toke felt like a rocket ship was lifting off in his head. Very long story short. He didn't show up for work on Friday or ever again, chasing the dragon, trying to get that same feeling as the first hit. After he burned through all his money, and borrowing off people, he resorted to stealing and ultimately ended up in jail which saved his life. He got into rehab and got out of it. Just say no to everything but booze, pot and occasionally psychedelics.

Is this proper form?

It looks pretty strict to me so I'd say so Regs.

Wait, is this the Asstastic Angles thread?

From Just for Laughs gags

RIP Bob. You were and awesome comic.

A whole new category of the UFC

The fix was in. 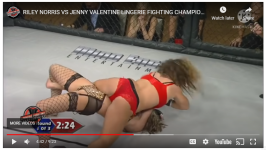 This was a great show. Loved Johnny Fever. RIP