Side A - I can see Sniper putting in a real shift and maybe taking it...Lobbans are up from D3, but they are arguably a D1 level squad, young, talented, and clearly been together for a long time. The rest I am not too sure about honestly.

Side B - NK should be formidable as usual and Lomas have another deep and talented squad (again all based off of last season). The like of Westside, TArrows, and Bingers Army may be a surprise this season and make it a tough pool to be in! Good luck to all in that pool! Might be the most hotly contested.

Great to get the season under way. We took on FFC over at McNair on Saturday afternoon, and boy was it a joy to play on grass. The pitch was in great shape. It took the FFC GK 5 minutes to complain that the grass was too long. It had been mowed a couple days prior to kick off FFS...

We only had 14 bodies for opening weekend, from a roster of 25, so we were shooting ourselves in the foot before the ball was even kicked. FFC certainly had more options off the bench then us.

With limited options, we were forced to sit back and let FFC have more of the ball, and they managed to knock it around fairly well through the middle of the park, however once they managed to move the ball outwide and try to attack in the final thrid, they really didn't create much other then wayward crosses going out for goal kicks. I don't recall a signal effort on goal from open play. A couple of freekicks from long range seemed their only threat from their # 10, who is a quality player, and was strong on the ball, but complained every time he got tackled that it was a foul. EVERY TIME.

We would counter when we could, and earned half a dozen corners as a result. On about the 6th one, 5 minutes from time, we got our goal. They complained that it hadn't crossed the line, but the lad who attempted to clear it, was standing on the post, and his leg was well behind said post. The ref was on the 6 yard box, in line with that post and saw it our way. Frankly he was in perfect position to make that call. 1-nil at the half.

We made 3 changes, to give a breather to those that needed it, and did so all throughout the 2nd half with our 5 remaining subs. Again, short bench meant sitting back. FFC had more of the ball obviously but again, really didn't create much in terms of efforts on target other then from free kicks.

We defended well, and ran out deserved winners I thought.

FFC GK needs some proper kit. The lad was wearing a grey polyester zip up jacket, and had BLACK DUCT TAPE wrapped around his pants at the ankles, SHOC-KING. 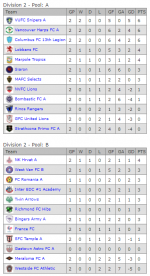 Pool B is TIGHT already! Too close to call for the season, waiting for mail-in ballot counts...

What did you think @big gk ?

Our game got postponed as Andy Livingston is a dump.

Watched Meralomas - Romania on Saturday at Connaught. The pitch looked great considering all the rain.

Not much to tell in that match, a wicked defelction from a shot 30+ yards out on the first goal, shortly before the half, and a terrible back pass to the GK 15 minutes into the 2nd half was punished and sealed the deal for Romania.

Had never seen the ref before.

Don't think we got a shot on Barthez so was tricky to really see him in his all his glory. 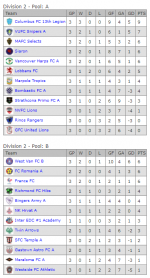 Beauty day out at McNair on Saturday, the pitch was in fantastic shape.

Game had barely gotten under way when Meralomas scored inside the opening 3 minutes. We were actually on the attack, when we coughed it up and they went the other way. A misjudged tackle just outside our box let their striker in, who rounded the GK and slotted. Dreadful start, we clearly hadn't realized the game had started FFS.

15 minutes later, after trading a handful of half chances, Meralomas turned the ball over in their defenside third trying to play out of the back, and we managed to equalize.

Again, and only minutes after equalizing, we shot ourselves in the foot, and let Meraomas take the lead a second time. Another rash challenge, this time inside the box led to a PK which was taken well by their player, 2-1.

5 minutes later, after we had just hit the crossbarwe, we equalized after earning a PK. Ball played into my feet just outside of the area, I layed it off to a runner coming through, and he was caught by the lunging defender. No complaints from the Meralomas lads on that one. PK converted and it's 2-2 until the half.

Second half is more of the same, trading chances but not converting. Meralomas couldn't hit the target from headers off of corners, so they must have been disappointed with being that wasteful, as we couldnt deal with their height on set pieces.

We certainly felt we should have won with some of the chances we created. Their GK made some great saves throughout the 2nd half, pushing one effort on to the post from close range, and stopping another attempt point blank on top of the 6. We had a chance cleared off the line as well.

Ernesto had a great game in the middle.

EARLY DAYS but I'd venture a guess that West Van is the favorite for promotion.
T

shite match by us, didn’t appreciate the surrey comments by the West Van players. Also the video taping coach who was sent off. ‍

great division this year however! Every week is up in the air, surrey changerooms will hopefully be open soon, away teams just ask! Cheers.

Little late with this one. Romania had most of the ball in this one. We managed to keep them frustrated and got to the half at nil-nil. 2

Don't know what I did there...

Little late with this one. Romania had most of the ball in this one and controlled the game. We managed to keep them frustrated and got to the half at nil-nil. 2nd half started and they scored right away off of scramble from a corner. Within 5 minutes it was 2-nil after a nice finish from the top of the box off of a quick counter attack. TThe heads dropped a bit and the legs got heavy, but it didnt stop the game from opening up quite a bit. Chasing a goal to get back in the game, Romania caught us twice more in the last 10 minutes to put us out of our misery. Dissapointing result but with only 14 bodies we were up against it from the beginning, our own fault.

Never had that ref before, he was half decent in the end.

After going W, D, L to start, we decided to mix it up for this one. Again, we were short on bodies, it being Thanksgiving and all. We set ourselves up very defensive and tried to play direct as possible.

We dropped off and let Inter have the ball in their half, and only pressured the ball carrier in our half. Inter kept possesion fairly well, but their attempted through ball trying to break us down led to a lot of balls to the GK and goal kicks. They did however manage to break through once, on a ball which was offside by all accounts, but the striker put it away nicely and they we up 1-nil just before the half. 2nd half started basically the same, and Inter managed to slip another through ball in behind, and the striker again, managed to round the GK and finish nicely. They scored the same goal twice, 5 or so minutes either side of the half. Thats when the game really changed. Inter made a couple of subs, and it seemed like they lost interested in playing quickly like that had done, and wanted to slow the game down and defende. We managed to pull once back, off of a set piece. Ball far post, headed back across goal, keeper made a nice save, but a tap in rebound goal got us back in the game. Shortly thereafter, we won a PK for a hand ball by their striker trying to defend. Why he had his hand above his head I don't know. PK slotted and it's 2-2. A couple of half chances for both sides towards the end to win it, but couldn't be taken.

Lads showed a bit of character with that fight back which was nice to see.

Dieter? was the ref. He's a strange one, one minute hes trying to be your friend, the next minute he won't give you an answer to a question. He did alright on the night though.

Looking forward to seeing @big gk and the army this weekend.

club_i_champ said:
Dieter? was the ref. He's a strange one, one minute hes trying to be your friend, the next minute he won't give you an answer to a question. He did alright on the night though.
Click to expand...