The rain tried to throw a damper on the weekend, but it just created a little extra drama, as all games were played, and the results did not disappoint in VISL Division 1 action.

Westcastle took down defending Jackson Cup Champions Gorge FC 2-0 in the weekend opener at Hampton. Jonathan Walter, possible team MVP, had the first goal and Kalen Park added a goal via the spot. Simon Norgrove added another clean sheet to this years totals.

Keeping the clean sheet theme going, Division 1 leaders Mid-Isle came into Oak Bay and defeated the south Island boys of Bays United 3-0, with call up keeper Sachdev Grewal earning the shutout and a big three points for the Mid Island boys as they stay atop the standings.

The VISL ‘Game Of The Week’ had second placed Nanaimo United hosting defending champs Cowichan. United defeated the previously unbeaten Cowichan 3-2, with Nanaimo’s goals put away by Daniel Cato, Taylor Arbour, and Division 2 call up player Renan Rebelatto, who scored in the 89th minute to secure the win. Russell Lederer got the brace for Nanaimo, who slip further behind in their quest for the fivepeat. Game MVP was midfielder Matt Mehrassa of Nanaimo United.

The final game of the weekend was an upset in most people’s books as Fernwood defeated Lakehill 1-0 to earn their first win of the year. Josh Cuthbert got the loan goal, while Jesse Rice earned the clean sheet.

Here are how the Division 1 standings look after all that action: 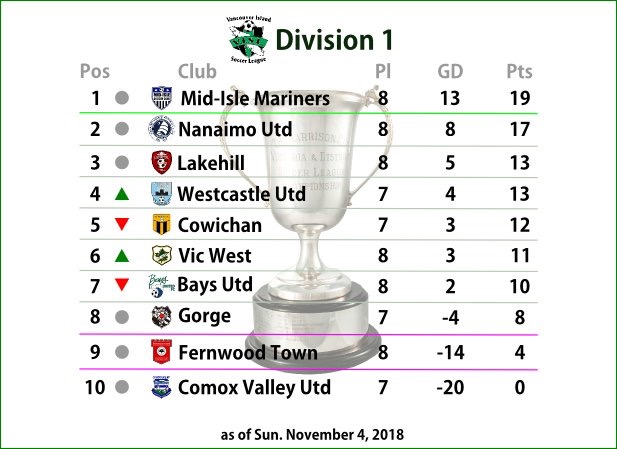 Still very much all to play for, and here is what Division 1 has in store for the upcoming long Remembrance Day weekend of top level amateur soccer on Vancouver Island. 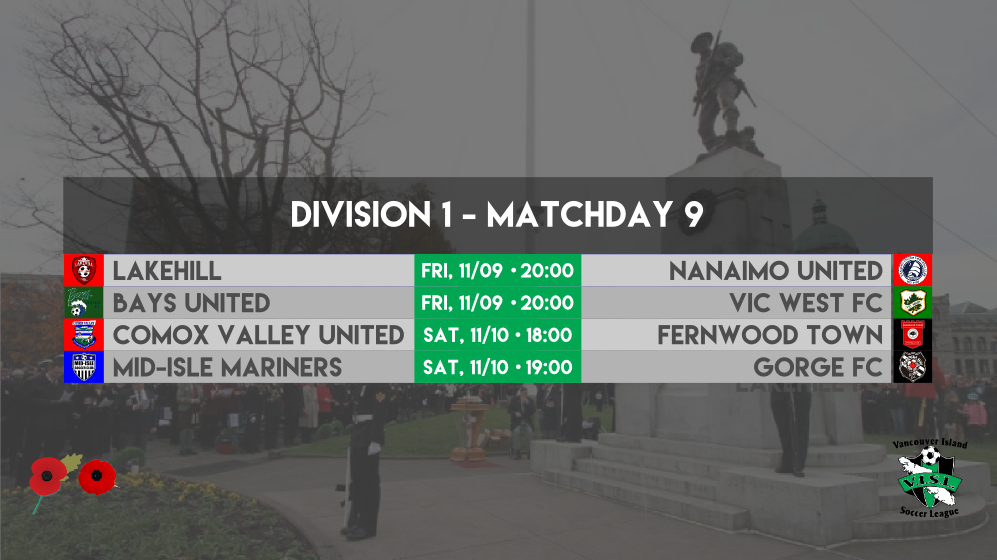 Lakehill will look to bounce back after some tough luck of late, while Nanaimo will try to keep pace with Mid-Isle.

It’s the Battle of the Greens at Oak Bay High as Bays United will look to get back in the winning groove, while Vic West look to vault up the standings. Both teams will need the three points or risk digging themselves into an ugly mid season hole.

Up Island at Vanier, Comox will look for their first points of the season, while Fernwood will look to keep the winning going after topping off Lakehill last week.
A win for the Fernwoodians get them pretty close to Gorge, and could spell the end for Comox.

In Ladysmith, Mid-Isle will look to stay in top spot as they host Gorge FC, who have a tough 48 hour period as they are also playing in the McGavin Cup Final on Monday November 12 at Layritz – a 2:15 pm kickoff.

The VISL Game Of The Week will be from the Masters A Division as UVic Alumni will host Cowichan 49ers. Both teams are undefeated and atop their division. 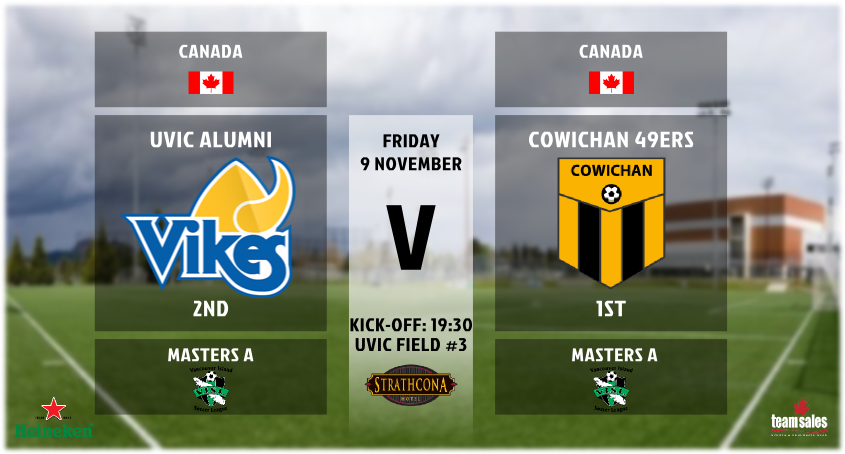 All VISL games will take place over Friday to Monday and will take a moment before each game to remember those that served and enabled us to do many things. One thing we all enjoy, and are able to do so because of all the brave men and women, the beautiful game.