PNE said:
Can I guess that you're not a fan of Michael Owen ?
Man City are the team I follow in the Premiership , so he's not exactly my favourite either.
There are others who really are excellent & worth listening to. Alan Shearer , Ian Wright.
Surely you'll agree with me on some of these.
I guess my point is , I enjoy listening to these ex-players talking about the game.
It's almost as enjoyable as the game itself.
Hope I can find it on Fubo this weekend.
Click to expand...

Loved him as a footballer. Can't stand him as a pundit. He's the perfect example of why you shouldn't throw someone in front of the camera just because they played at a high level. He's well known for having the most inane comments. I won't rehash them here, but you can do a quick Google search and find lists of them easily enough.

The person I most enjoyed as a pundit was Jose Mourinho during his stint with BeIN after getting sacked by ManU. He provided a level of insight into both team tactics and the interpersonal dynamics of top level professional teams that I've never heard from anyone else in those roles.

Gareth Wheeler is a fcuking joke. He is always trying too hard to say something "controversial" or come up with a new catchphrase. He'd be better suited to WWE.

I guess my Oliver Platt reference was over your head.

Anyone watch the Chelsea-Spurs game? A cracker with a lot of plot twists

Some results here to spice things up lately.
I enjoyed the Newcastle/City match as well as Chelsea/Leeds.

Never an easy game in the EPL.
L

Three lethargic displays that is so unlike this team. They look like they played every possible game last year, and with the injuries, running out of ideas. I cringed when I saw Elliot, Hendo and Milner together today. Just not creative or technically good enough when you had a jacked team pressing early and often.

Oh well, they've made me into a glass half empty kind of supporter over the last 20 years. Already looking towards next August...

How fcuking awful was that shithousery by NUFC? 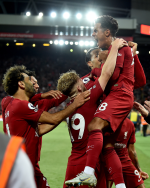 Epic comeback nad Newcastle got what they deserved by wasting so much time.

Just an awesome start to the year with all sorts of surprises, Haaland blowing it out of the water, other younguns showing top form. Hell, even Arsenal are winning some games - Crazy - Love it!

Some more quality officiating today in the world's best league. As If it isn't corrupt.

That Newcastle goal for example. How anyone watches that and thinks the Newcastle player committed the foul is beyond me.

Didn't see west hams but heard it was bad from a Chelsea fan.

Coutinhos goal lol. Yeah that's offside for sure. I mean City really do need all the help they can get

I gotta say, if MC don't win the league and take CL this year, it would be considered a failure. Just a crazy line up of stars. I wonder what the payout was on a bet if Haaland had bagged a third hatty?

Where was that Villa draw about 4 months ago

Tuchel sacked! Did not see that coming so quickly into the season.

No sh*t. Wow, that is an abrupt lack of confidence. There must have been a very heated behind the scenes confrontation after yesterday's game. Would you want to come in after that, knowing that a couple of losses means you are out on the street? I bet Thomas has a very large parting package.

'paying him £13m and his backroom staff an additional £2m to depart.'

And reading the English tabloids, it sounds as if players were talking about his marriage break up and new girlfriend. The only way that is true is if the new girlfriend has a major rack or something. Potter as replacement? That seems as erratic as firing Tuch.
Show hidden low quality content
You must log in or register to reply here.
Share:
Facebook Twitter Reddit WhatsApp Email Share Link