So Neuer wins Keeper of the year but doesn't make the FIFA XI? How the fcuk does that work? 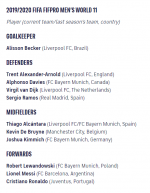 Regs said:
So Neuer wins Keeper of the year but doesn't make the FIFA XI? How the fcuk does that work?

Teams of the year​

The winners of The Best player, goalkeeper and coach awards were determined through a voting process in which four groups had an equal say: football fans, selected media representatives, and the captains and head coaches of national teams from around the globe.​