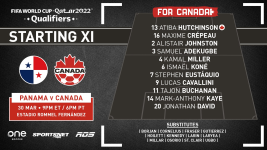 The Franchise said:
Canada needs 2 of these 5.001 possibilities:

Tunisia draw or loss. (done)
Nigeria knocked out! (Done)
Morocco knocked out!
Egypt loss to Senegal by one goal, but advance on away goals.
Portugal knocked out!
Costa Rica beat USA by 6.

Canada wins and they are in Pot 3 now
Click to expand...

Please. Someone make him stop.

Alistair has stuffed a bunch of action coming down that side. Time for Canada to get some shots off

How is Sportsnet only showing half a game??

utah said:
How is Sportsnet only showing half a game??
Click to expand...

Huh? 360 had pregame and everything since

Just me, or is Cavalini a flow killer?

Totally lost faith in this guy, whereas I've come 180 degrees on Formerly-Lazy-Larin. Cava has to watch how Larin makes his runs off the ball, and keeps the flow going. I don't know if this is just a characteristic of Mexican football, to be static in holding up the play, or a Cava characteristic, but it was painfully obvious that in that one direct swap of personnel, the flow improved immensely, and he was a big reason for it. Hoilette as well is very clever in his movement, and that helps, but really, Cava, and his overall ineffectiveness and inability to make an impact stood out.

I'd say this....Herman needs to switch his focus on the secondary striker role to Ugbo. He just seems to be better at that off-the-ball movement.
M

somehow, it's heartwarming that we've managed to qualify and yet remember that missing on the proverbial open net is baked into our DNA...

they can talk about house money and all that but pot 3 vs pot 4 is actually a significant difference, and could well be the difference between three and out and something better...
G

Ugbo is much more dynamic than Cavallini.

Ayo akinola is coming back from injury as well and may push for a spot as well.

Ugbo Cavallini and Akinola will be the battle for the striker spot with Larin and David locked in already.

Personally I see Cavallini the man out. Not sure how many strikers Herman will take.

Akinola was doing well till he got hurt so will be interesting to see his form the next few months. The usa was pushing him to sign for them as well. 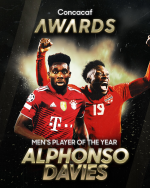 Actually surprised David didn't win it. Arguably in the end, a bigger impact than Davies on the WC run, and his form in Lille has been impressive save for that recent dry patch.

What about Larin?? How many goals did he score? He must be top scorer in Concacaf eh?

I think he has a claim, but they look at the whole picture including club success. What David and Davies have done in France and Germany are pretty tough to ignore, whereas Turkey would be considered a "Tier II league", no? @Canucks4Ever , @dezza .... am I right on the Tier II thing?
P

Vancouver to host canada vs iran in June.

Presale starts at 10AM this morning.

Gonna grab some tickets for the Iran match, anyone else thinking of going?

But nice surprise in the mail arrived 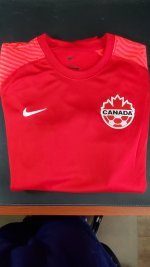