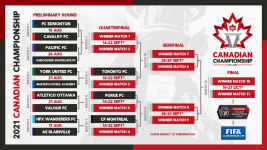 Would love to see Pacific steal one and Bustos factor in scoring.

The Caps may be my childhood club, and cutting those ties is tough, but I can't think of one thing they are doing right now that is in line w/ what I want to be seeing out of my local MLS club!

Pacific (and CPL) are at least doing some things I value. And, back to Bustos....I felt there were plenty of opportunities for the Caps to give him a better look and fairer shot at winning real firm footing within the squad. He's doing some nice things now. Would that translate into MLS? I doubt it, but would he be a better fit in the attacking mid role than we have now? Yeah, likely. At least in the middle (Dajome and Caicedo as the wings were both the straws stirring the drink on the weekend). I dunno, the club just always seems rudderless, you look through the roster, and scratch your head trying to figure out their plan.