A regular issue for football managers is how to integrate multiple creative attacking players into a system that doesn't clip their wings, and still keep a side's defensive cover intact. Valour FC's Rob Gale found a brilliant solution recently against HFX Wanderers FC, fielding both of his in-form attacking sparks – Marco Bustos and Michael Petrasso – in free roles just behind striker Michele Paolucci in a fluid 3-4-3 attacking/3-6-1 defensive formation. The press from this brigade completely drenched Halifax's midfield in pressure, leaving swathes of room for the Valour's "free no. 10s" to rampage forward at the Wanderers back four in transition. Indeed, with Valour's military heritage in mind, one was tempted to see the mobile defensive and attacking unit of Petrasso-Bustos-Paolucci as some sort of inverted flying V column that the Wanderers simply couldn't outmaneuver. 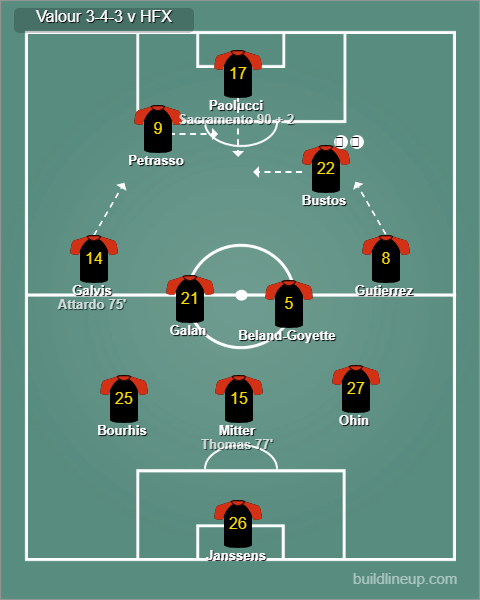 Gale had already tinkered with variations on the theme in previous matches, using a shape closer to a 3-5-2 late in the Aug. 15 home game against Edmonton FC to secure a 3-1 victory, and then deploying a similarly conservative approach with a 3-5-2 away to Pacific FC on Aug 24. In the tilt against Pacific, Bustos was used as a single no. 10 at the tip of a midfield trio: perhaps a more conventional guard against a three-man midfield opposition, and a likely bulwark from the incessant energy and verve provided by Pacific's dynamic youth. Although Valour lost to Pacific on the day – in fairness, undone only by a single moment of poor marking on a free kick and a controversial penalty – there were still numerous encouraging hints in free play. Just what could Bustos, Petrasso and Paolucci could do if given free rein? Well, enter the HFX Wanderers… Halifax's 18-day rest may have caused some rust to form on the team's chassis, but their relatively classic 4-4-2 shape had low odds against Valour's tactics. Part of this scenario was a canny old trick. Though not without historical precedent, three man back-lines became especially trendy in the late 1980s/ early 1990s as a potent antidote to the 4-4-2, which had been ubiquitous in Europe and are still very relevant. The gist of the 3-5-2 idea, for example, was simple: three defenders can comfortably defend and play around the opposition's two strikers. The extra man in midfield establishes central dominance; the wingbacks mark the wide midfielders and run off them in attack, and the two forwards are able to man up with centre backs, or run into the flanks to drag out markers and punish over-eager fullbacks. West Germany won a World Cup with a version of this in 1990; Brazil did the same in 1994. Eventually, 4-3-3 variations devised to match up in midfield and find weakness in wide areas ended the use of three man back-lines, but recently various tweaks to the balance of the system have proven there is still life in the model. On Wednesday night at IG Field, Rob Gale's modified 3-4-3 vs. HFX provided a clinic in this theory. Valour's back three of Raphael Ohin, Adam Mitter and Yohan Le Bourhis, sealed in by the excellent defensive screen of Jose Galan and Louis Beland-Goyette and flanked by speedy and disciplined wing-backs, Nicolas Galvis and Diego Gutierrez, easily dominated possession from the back of the pitch and evaded a disconnected and sluggish press from Halifax's Tomasz Skublak and Luis Alberto Perea. When Mohamed Kourouma or Akeem Garcia became weary of watching Valour's numerical superiority and stepped in to help, Valour's defenders, or goalkeeper Mathias Janssens, simply knocked the ball beyond them to the wide-open wingbacks. Bustos and Petrasso – starting in wide areas in possession – could also choose to drag their fullbacks deeper, combine with Galvis and Gutierrez, and simply break the press. If Halifax did find the necessary graft to make the press difficult – at times Skublak or Perea dropping deep to even up midfield numbers – Valour could simply go long to the mobile Paolucci. The greatest feature of Valour's shape wasn't their play on the ball, arguably, but rather their pressing shape off it, and then the ensuing rapier-like transitions. Bustos and Petrasso squeezed into inside channels to start the Valour press, effectively creating a midfield block of four players with the Spaniard Galan and the supremely confident Beland-Goyette at the base of the spine. The midfield zone was further limited by the compact positioning of wing-backs Galvis and Gutierrez, and then depth control arrived from Paolucci, who could drop off the front or press the freshly-minted Wanderer's centre-back couplet. Mathematically, Halifax's Andre Rampersad and Kouamé Outtara couplet had no chance in central midfield, unable to see pressure coming from numerous axis, and left playing backwards or forced into turnovers. As Valour changed gears into counter-attack mode, the two "free tens" could drift forward or sideways from central positions, free of any clear marker; Halifax fullbacks Ndzemdzela Langwa and Andre Bona were naturally uncomfortable following the pair into central areas, but had to pick them up when they broke forward on the break. They also had to be concerned about the speed and threat of Galvis and Gutierrez in wide areas. In the end, the Winnipeg attack had six players attacking Halifax's back four at the best of times; at the worst, it was man against man against Halifax's defensive posture. Valour's "Flying V" column had been battle-tested and proven effective.