The Gatorade Team of the Week for the fifth week of the Canadian Premier League action in 2021, brought to you by Kristian Jack and OneSoccer's Oliver Platt: 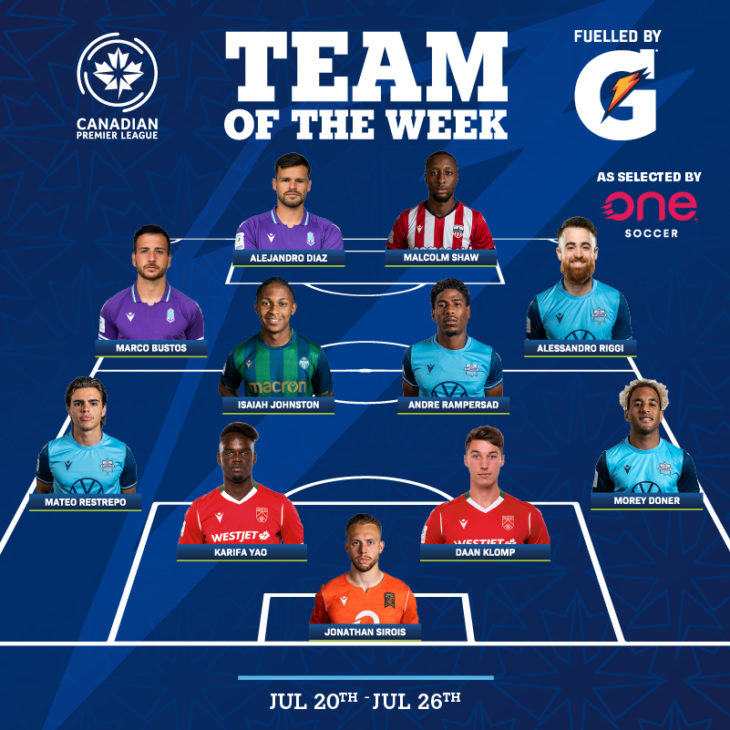 Jonathan Sirois (Valour FC) Another week, another selection for the CF Montreal loanee at Valour after setting a record number of saves by a CPL goalkeeper (11) in a match. Sirois isn't just a contender for the best goalkeeper of the season so far but is in early contention for player of the season honours, producing stellar showings each week. HFX Wanderers were terrific on Saturday, having 12 shots to zero on target, but still only came away with one goal and it took a great strike from Pierre Lamothe to beat the 20-year-old netminder.

Morey Doner (HFX Wanderers) The 27-year-old has been one of the best players for Halifax this season and has narrowly missed out on previous selections at right back in the Gatorade Team of the Week simply because Kadin Chung of Pacific FC has also been very good in the same position, but Doner gets the nod this week after an accomplished all-around showing against Valour FC. Doner led his team in touches and completed passes in the opposition half, combining well with Omar Kreim down the right flank.

Daan Klomp (Cavalry FC) One of the most impressive individual performances of the season came from the Dutchman in a statement victory over Forge FC that led to him being named CanPL.ca Player of the Week. "It will take some money to sell him," stated Wheeldon afterwards when asked about the imperious display of the centre-back. "He can defend, he can play, he runs for 90 plus minutes and he seems to be getting better and better. Massive upside." The Canadian Premier League lost one of its best central defenders with Valour's Andrew Jean-Baptiste suffering a season-ending injury this past week but newcomer Klomp has already shown through eight games that he looks to be a tremendous signing for Cavalry FC and the league. This was his best performance of a very impressive 2021. The 22-year-old led the game in tackles, clearances and possessions gained while over 50% of his pass attempts were forward and into the opponent's half. What a find this is for Cavalry FC. Karifa Yao (Cavalry FC) The CF Montreal loanee gets his place for the second time in the team of the week after another very comfortable performance against Forge. The 20-year-old continues to improve and is assured in possession. In this match, playing next to the accomplished Klomp switching between a back three and a back four, he completed 100% of his passes (33/33) thanks to his supreme reading of the game, decision making, work with both feet and understanding of when to play forward and when to keep possession in deep areas.

Mateo Restrepo (HFX Wanderers) Comfortably one of the most valuable players so far of the 2021 season. Without him it is difficult to understand where Halifax would be considering how many defenders they have missing. Looks at ease centrally or in a full back role, the 24-year-old brings real calmness to a defence and led his team in tackles and clearances against Valour on Saturday while continuing to play at the heart of their defence.

Andre Rampersad (HFX Wanderers) Halifax's leader led his team in touches, completed passes and interceptions against Valour but, as ever, stats only tell part of a story and to appreciate Rampersad you need to watch him closely. His ability to cover ground out of possession but drive his team forward in it allows them to play in a certain manner and along with Restrepo he deserves his spot in the team of the week for the second time. Isaiah Johnston (York United) The 19-year-old has a brilliant game on Saturday afternoon to close out the bubble portion of the season. Many will remember his goal, an audacious finish with the outside of his right foot on the volley, others will remember his celebration, running to the bench to celebrate like Neymar, but overall it was a performance of real maturity inside a central midfield that is working well alongside fellow young Canadian Cedric Toussaint. Johnston isn't afraid of suffering out of possession, showing real maturity in his decision-making and can open up teams in attack, producing a great ball through to Noah Verhoeven, that could have led to another goal against FC Edmonton.

Alessandro Riggi (HFX Wanderers) Before Saturday, Riggi needed to be patient and wait for his moment to shine, featuring in just two games as a substitute for a combined 38 minutes. He was handed his first start of the season against Valour and made an instant impact, bringing real quality and energy to the team down the left flank. The 27-year-old was a menace in attack, combining well with teammates, and causing challenges for Andy Baquero and others in the Valour defence. Marco Bustos (Pacific FC) The early contender for the best player of the year award added more evidence to the file in a sensational 4-2 comeback victory over Atlético Ottawa in both team's final game inside the bubble. First of all if you didn't see the game, watch these highlights because it was the best game of the season, featuring some players in this team, including, fittingly, the best player of the season who shined the brightest. Down 2-0, Bustos won his team a penalty, then produced a pinpoint corner on the head of Alejandro Diaz to make it 2-2, then hit the post from outside the box that rebounded to Diaz to make it 3-2. A hat-trick of assists that won't be recorded as such.

Malcolm Shaw (Atlético Ottawa) His team maybe struggling to score but with three goals in his last four games, Malcolm Shaw looks to be gaining confidence at the right time now the teams get to return home to play. Against Pacific FC, Atlético Ottawa pressed higher and played more direct to cause many issues for Pa-Madou Kah's side and Shaw was the instigator, leading the line well and setting the tone. He scored two goals inside the first fifteen minutes but unfortunately he wasn't the leading scorer in the match as Ben McKendry's red card soon after the second goal went in allowed Pacific to find more space and become the first team to win a game in CPL history after being two goals behind. Alejandro Diaz (Pacific FC) We have five goals from the front two in our team of the week and from the same match as Diaz became just the second player in league history to come away with the match ball (Rodrigo Gattas was the first in 2019 for York vs HFX). The influence of Bustos has been noted but all three of Diaz's finishes were instant, one-touch moments that showed just how efficient the 25-year-old Mexican can be. The former Club America man works really hard as a central focal point to his team's attack and has been regularly praised by staff and teammates for the work he does as a number nine, but he was still pleased to get his goals - as he told One Soccer - having gone into the game without a goal in 425 minutes through the opening seven games of the season.
Continue reading...