The Gatorade Team of the Week for the fourth week of the Canadian Premier League action in 2021, brought to you by Kristian Jack and OneSoccer's Oliver Platt: 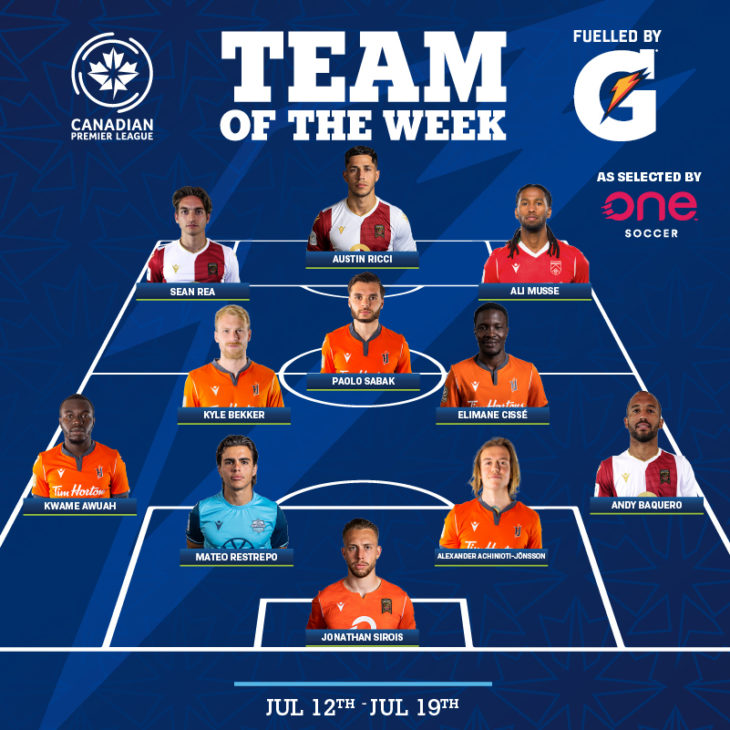 Jonathan Sirois (Valour FC) This is quickly turning into one of the biggest stories of the 2021 Canadian Premier League season. Valour's undisputed number one has now played six games to start his professional career and has yet to concede a goal. Against York United on Sunday night the smiling Sirois (see below) won the battle over Osvaldo Ramirez, saving the spot kick and maintaining Valour's lead. He would go on to make another big save from Lowell Wright and continue a record-breaking start to his CPL career. He has played 540 minutes without conceding in 2021.

Andy Baquero (Valour FC) The Cuban right back has been one of Rob Gale's standout players so far this season, a fantastic acquisition who has settled into a new environment immediately. The 27-year-old is comfortable in possession and is amongst the league leaders in successful pass attempts completed in his own half but when you watch Baquero closely you appreciate that many of his passes are with a purpose and played forward in a quick, dynamic style synonymous with Rob Gale's team. After an impressive showing against Atlético Ottawa on Thursday, Baquero was initially rested from the start against York United, but when key defender Andrew Jean-Baptiste was taken off with a knee injury he was immediately called for, with the equally impressive Stefan Cebara moving more centrally.

Alexander Achinioti-Jonsson (Forge FC) It was a week where Forge defeated FC Edmonton 1-0 and Pacific FC (again) 2-1, but almost as important as the results was the process, with the two-time reigning champions excelling in a 3-4-3 formation, in which many players in this team stood out. No more than the stylish Swede Achinioti-Jonsson, a familiar face often at the base of midfield, who this week occupied a central defensive slot in the middle of a back three where he adapted brilliantly thanks to his cerebral reading of the game. With both centre-backs Dejan Jakovic and Daniel Krutzen injured, the 25-year-old brought a calming influence to a much-changed back line. Mateo Restrepo (HFX Wanderers) It has not been an easy start to the season for Halifax. Coach Mesut Mert admitted their latest loss, 2-1 to Cavalry FC on Saturday, was 'deflating' and you have to wonder how much worse it would be if it wasn't for Restrepo. HFX have had a number of key injuries at the back and the left sided defender has been crucial to bringing much-needed organization and leadership in defence. When makeshift left-back Corey Bent was injured against Pacific FC, Mert could easily have moved Restrepo back to a position he was more comfortable with but admitted he needed the 24-year-old centrally. A true sign of just how valuable he is.

Kwame Awuah (Forge FC) Awuah has not just been one of the best left backs of this season so far but has simply been one of the league's best players on arguably the league's most in-form team. Much of what Forge do goes through the 25-year-old, who is comfortable at left back in a back four, where he is often seen tucking inside and playing a more central role in possession, or as a wing back, a position he played this week and contributed significantly to their models of play, combining with the likes of Kyle Bekker, Mo Babouli and others while nullifying Marco Bustos on that flank. Awuah has played every minute so far of his team's matches through seven games. Only the Pacific pair of Bustos and Kadin Chung have more successful passes in the opposition's half so far this season.

Elimane Cisse (Forge FC) No one touched the ball more in a tremendous week for Forge than the 26-year-old Senegalese midfielder. Cisse is an integral member of Bobby Smyrniotis' side who brings a real mixture of penetration from central midfield combined with an ability to treasure the ball in possession. Cisse can also play in many different positions and was asked to play further forward late in the game against Pacific FC when Maxim Tissot came on to partner Kyle Bekker in midfield. Cisse led the team in interceptions against FC Edmonton and no one regained possession more than he did in the match against Pacific FC. Kyle Bekker (Forge FC) A third successive appearance in the team of the week for the 2020 Player of the Year. Bekker was tremendous alongside Cisse in a double pivot, covering ground out of possession and being masterful when in it, contributing to two big wins for Forge. He also continues to score brilliant goals, after a brace last week against Cavalry FC, he followed it up with this goal of the season candidate.

Ali Musse (Cavalry FC) Heading into the weekend game against HFX Wanderers, Tommy Wheeldon Jr's side had gone four games without a goal for the first team in club history. They needed a spark and found it in a 2-1 win that Musse starred in. The Somalian international was a real attacking threat, combining well with Anthony Novak, playing key passes and scoring a crucial game-winning goal. With competition for places increasing amongst the Cavalry attackers, the emergence of Musse is important for the team and makes them arguably one of the deepest in that area in the league. Paolo Sabak (Forge FC) This has been the best week for the Belgian since he joined the Canadian Premier League. Sabak played as a false nine in a new Forge system, contributing significantly to both victories, where his intelligent and movement shone in possession and his workrate was clear to see out of possession, regularly stopping balls played into Edmonton’s central midfield in a 1-0 win midweek. Smyrniotis was full of praise for his attacker: “We worked on the system the past couple of days and with Paolo it was about getting him into spaces on the field he could succeed, into a midfield box and allow Babouli and Navarro into the half-spaces.” Sabak executed the game plan perfectly and was outstanding again in the weekend win over Pacific FC, where he was named Gatorade Player of the Match after scoring a goal from the penalty spot. Sean Rea (Valour FC) The 19-year-old CF Montreal loanee continued an impressive start to the season with his best individual game in Sunday evening's 3-0 win for Valour FC over York United. Rea is a dynamic dribbler who has really good ball control and understanding of space. He is direct and drives his team forward in crucial moments but also understands his defensive responsibilities while playing on the left flank in a fluid system that can at times ask him to track back and help the left-sided defender. Further forward, however, is really where he is dangerous the most, operating in the half spaces between the lines where his runs and intelligent passes proved crucial with two key assists.

Austin Ricci (Valour FC) The league's most in-form striker was a menace for York United on Sunday evening, scoring two goals and doing a lot more damage, living on the shoulder of centre backs and causing them real problems with his intelligent movement into space. The 25-year-old continues to put his fingers to his mouth to silence some when he scores but we have to talk about how impressive his start to the season has been for the best team in the league through seven games. Ricci has been a dynamic performer in the final third, forcing defensive lines deeper, reluctant to allow him in behind, opening space for the likes of Rea, the impressive Moses Dyer and Keven Aleman to occupy, all before Ricci waits for his moments to shine.