The Gatorade Team of the Week for the thirteenth week of Canadian Premier League action in 2022, brought to you by Kristian Jack and OneSoccer's Oliver Platt. 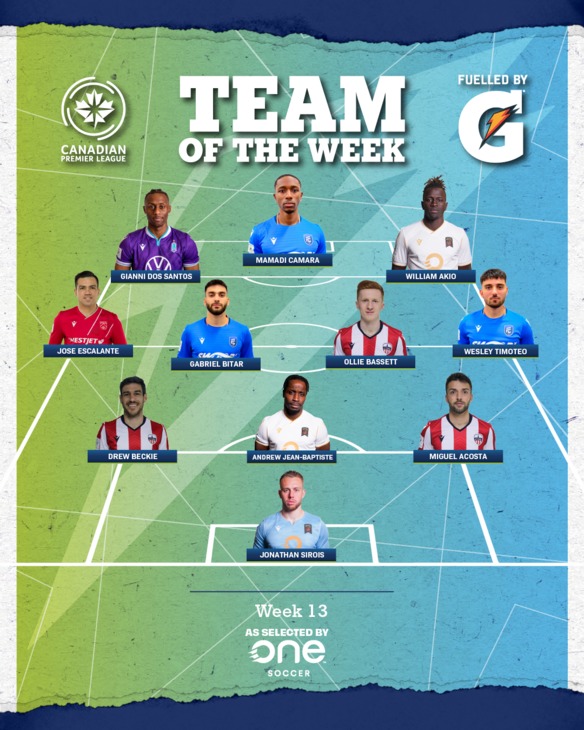 Jonathan Sirois (Valour FC) This week marked the third clean sheet of the season for last year's goalkeeper of the season and arguably his biggest yet. Sirois made four saves in a huge 1-0 victory for Valour over Forge at Tim Horton's Field. Only Andreas Vailkla has made more saves than Sirois' 34 this season.

Drew Beckie (Atlético Ottawa) Beckie captained his Atleti side to a pair of huge road victories this week, and as always led by example. Against Forge on Sunday he had seven clearances and two interceptions during yet another exemplary defensive effort. Andrew Jean-Baptiste (Valour FC) Valour looks like a different team when Jean-Baptiste plays, and they perform better too as evidenced by the numbers compiled by OneSoccer's Oli Platt below. Since returning from injury this season, Jean-Baptiste has been influential in all areas of the field for Valour, creating a chance offensively against Forge, while also making a stunning 11 clearances, and three interceptions. Miguel Acosta (Atlético Ottawa) Ottawa coach Carlos González spoke this week about how important Miguel Acosta is as one of the few veteran players who were with the club last year. On the field, that impact is really starting to show as Acosta had an excellent goal against Halifax midweek, before turning in some massive defensive plays and blocks against Forge to earn his side a clean sheet on Sunday.

Wesley Timoteo (FC Edmonton) Missing a penalty was just about the only thing that Timoteo did wrong during a dominant performance against York on Canada Day. He created five chances during the match, had a pair of assists and seven crosses as the architect of Edmonton's biggest win of the season. Ollie Bassett (Atlético Ottawa) Ottawa added two more wins this week, and Ollie Bassett had the match-winner in both. Controversial or not, his free-kick goal against Forge, in particular, was absolutely brilliant and yet another example of why he is one of the leading candidates at the minute to win the league's Player of the Year award. Gabriel Bitar (FC Edmonton) Edmonton is playing their best soccer of the season and Bitar has been a big reason for that progression. He again came up big on Friday, scoring the club's third goal, creating two chances, winning 12 duels, attempting seven dribbles. Jose Escalante (Cavalry FC) Cavalry largely has Escalante to thank for an impressive comeback against Pacific FC at Starlight Stadium. After the Cavs went down 2-0 early, Escalante set up a Daan Klomp header just before the half-time whistle from a pin-point cross, before scoring a free-kick himself early in the second half.

Gianni Dos Santos (Pacific FC) In a match where Pacific FC really needed a good result and performance in order to get back in the title race, Dos Santos scored a big second goal of the match. He was a threat from out wide throughout the match, with seven crosses. Mamadi Camara (FC Edmonton) Edmonton has mostly scored goals by committee this season, but Camara continues to be their biggest goal threat, getting his team-leading third of the season against York. He also had 15 passes into the final third as a key player in a lethal Edmonton counterattack. William Akio (Valour FC) In a plucky road win over Forge, Valour needed to be lethal when they got chances to go forward. Akio did just that, making a perfectly timed run behind the Forge backline and slotting the ball past Triston Henry for his second goal of the season.