The Gatorade Team of the Week for the twelfth week of Canadian Premier League action in 2022, brought to you by Kristian Jack and OneSoccer's Oliver Platt. 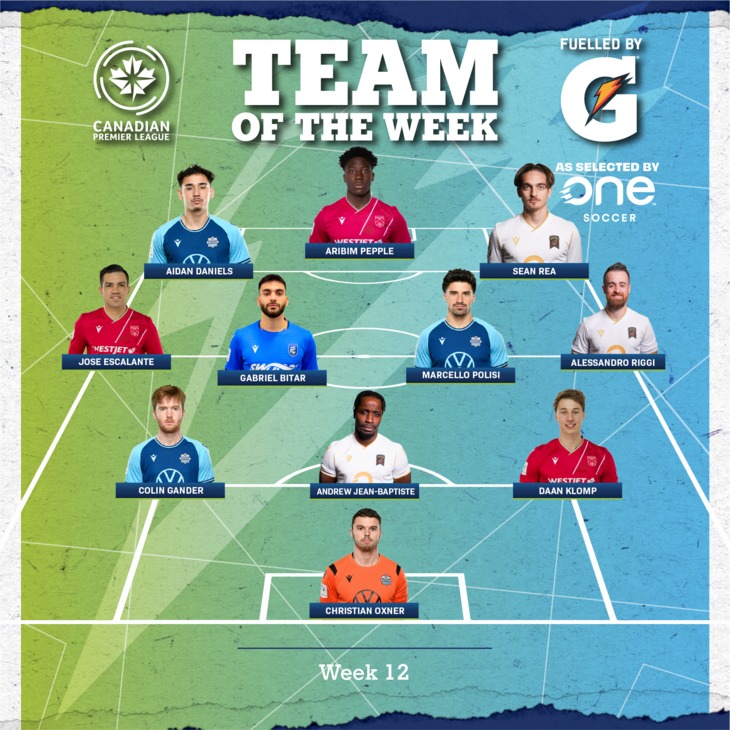 Christian Oxner (HFX Wanderers FC) Oxner picked up his third clean sheet of the season during Halifax's club-record 3-0 victory over Pacific FC. He had two saves during the match, including a brilliant one on Gianni Dos Santos late to preserve that shutout.

Daan Klomp (Cavalry FC) Against an Edmonton team that has proven very tricky to defend in recent weeks, Klomp was integral in Cavalry keeping their unbeaten record against their Alberta rivals. He was sturdy defensively with three tackles and five clearances, while also having more touches than any other player on the park during the match, allowing Cavalry to calmly dictate play in possession. Andrew Jean-Baptiste (Valour FC) This was another example of why having Jean-Baptiste is such a difference-maker for Valour. He brought intensity from the start of the match that his team fed off of, making a huge challenge that led to their opening goal, and was excellent in possession with 92% passes completed. He won all six of his duels, and had four interceptions and six clearances. Colin Gander (HFX Wanderers FC) The U-sports draft pick has been an excellent addition for the Wanderers at fullback and showed why against Pacific. He had an assist and was solid defensively with four won tackles.

Alessandro Riggi (Valour FC) Riggi was a handful down the flank all match yesterday against York United and finally proved too much for the hosts when he smashed home the opening goal. He had three chances created, two successful dribbles and 22 passes into the final third as a catalyst in a dynamic Valour attack. Marcello Polisi (HFX Wanderers FC) Playing against his brother Matteo's Pacific FC, Marcello certainly gets the family bragging rights during a massive 3-0 victory. The elder brother, Marcello was particularly solid in winning the ball back for Halifax in key areas, doing so twice in the final third, three interceptions and won possession five times overall. He also slipt in Sam Salter to a dangerous area and during the resulting play, the Halifax attacker won a penalty. Gabriel Bitar (FC Edmonton) He scored the goal of the weekend in the Canadian Premier League, and continues to be a bright light for Edmonton this season. Outside of the highlight reel, Bitar's midfield play was solid as always with seven duels won and two won tackles as he put in a strong overall performance at Spruce Meadows. José Escalante (Cavalry FC) Perhaps no player in the Cavalry side has taken on Tommy Wheeldon Jr.'s mantra of "playing to the f--ing whistle" better than Escalante. The Honduran winger again kept the ball in at the end line on Sunday, which resulted in an FC Edmonton own goal.

Sean Rea (Valour FC) Valour was back to their best at York Lions Stadium on Sunday and a big part of that was the attacking play of Sean Rea. The young midfielder set up the winning goal with a brilliant corner kick to Moses Dyer, and then added an insurance goal himself in the dying moments. He also created four chances during the match. Aribim Pepple (Cavalry FC) Despite only six appearances so far this season, the 19-year-old striker now sits tied for second in the golden boot race with five goals. He added two more over the weekend in a 3-1 win over rival FC Edmonton and has now scored in four straight matches for Cavalry. Aidan Daniels (HFX Wanderers FC) The Halifax attacker showed his brilliant dribbling ability on an excellent individual effort for Halifax's second goal. It was the reward for a strong offensive performance from Daniels, who had four shot attempts and five touches inside the box during a massive win for Halifax.
Continue reading...