The Canadian men’s team is entering another program-defining year in 2020. Uplifting wins over the United States and Cuba in Concacaf Nations League action this past year teased Canadian supporters with what is possible. However, big losses to Haiti at the Gold Cup and the U.S. in the Nations League ended up bringing Les Rouges fans right back down to Earth. There are reasons to be optimistic, though, as the last 12 months saw some new players welcomed into the fold, which could prove useful when Canada begins its qualifying campaign for the 2022 FIFA World Cup in Qatar. Whether or not Canada qualifies for "the Hex," it's about to get very real and very soon for the Reds, and they'll need all hands on deck for what will be a pivotal 2020 for the team. With this in mind, CanPL.ca presents this look at Canada’s depth chart ahead of the upcoming year, keeping in mind that many of these players can and have played in multiple positions for both club and country. For reference, here's how we viewed Canada's depth chart before the start of the national team's 2019 season.
Goalkeepers

On the cusp: Simon Thomas (KFUM Oslo), James Pantemis (Montreal Impact), Jayson Leutwiler (Blackburn Rovers) and Alessandro Busti (Belluno) Not much has changed in net for Canada in 2019. Milan Borjan’s form for club and country – in the UEFA Champions League and Concacaf Nations League, respectively – is still too much for the rest of the field to overcome. That includes Maxime Crepeau, who took home Goalkeeper of the Year honours in MLS with the Whitecaps Cavalry FC’s Marco Carducci slots in at third after being the first CPLer called up by Canada. Other ‘keepers that could challenge? Recent Montreal Impact signing James Pantemis and Alessandro Busti.
Right Fullback

On the cusp: Michael Petrasso (Valour FC) and Juan Cordova (Huachipato) Richie Laryea came out of nowhere in 2019 to become Canada’s starting defender on the right side. A resurgent season with Toronto FC led to impressive outings for Canada against Cuba and the U.S. Zachary Brault-Guillard stands as the next pure right fullback in line for a starting job. Marcus Godinho slips further down after a disappointing Gold Cup showing against Haiti. Valour’s Michael Petrasso remains in the hunt, but did fall down the depth chart compared to last year.
Centreback

On the cusp: Adam Straith (VfL Sportfreunde Lotte), Manjrekar James (FC Midtjylland), Dejan Jakovic (Unattached) and Andre Hainault (1. FC Kaiserslautern) Perhaps surprisingly, Doneil Henry and Derek Cornelius remain one-two for Canada in the centre of defence despite lacklustre years with the national team. They're no longer teammates at the Vancouver Whitecaps, so Herdman may decide against this tandem by the end of 2020. Steven Vitoria is an obvious successor on the left side of the central pairing, following back-to-back starts for Canada to close out 2019. CPLers Didic and Zator look primed to continue their run with the national team past a few late-season call-ups, although not as starters.
Left Fullback

On the cusp: Kwame Awuah (Forge FC), Marcel De Jong (Pacific FC) and Ashtone Morgan (Unattached) Samuel Adekugbe takes the top spot away from 2019's projected starter Marcel De Jong after the latter’s injury problems in 2019. Adekugbe, who has nine caps to his name, is joined by 2019 debut fullback Kamal Miller. The Orlando City defender made 16 appearances for his club this season. York9 FC’s pacy wide-man Diyaeddine Abzi arrives as a third (and even younger) option. Rumour is the uncapped Abzi, 21, is on John Herdman’s radar. Will he be called up before De Jong or even Forge FC’s Kwame Awuah?
Defensive Midfielder

On the cusp: Will Johnson (Orlando City), Nik Ledgerwood (Cavalry FC) and Louis Béland-Goyette (Valour FC) No surprises here. Montreal Impact’s Samuel Piette retains his spot from last year after another consistent performance through Canada's Gold Cup and Concacaf Nations League campaigns. This position is Piette’s to lose. Stephen Eustáquio comes in just behind Piette after making a much-awaited national team debut for Canada against the U.S. this November. A long injury layoff kept the Leamington, Ont., midfielder off the pitch after he declared for Canada in January. TFC's Liam Fraser remains in the pecking order after a run to the MLS Cup final, but he still has a ways to go.
Central Midfielder

On the cusp: Noah Verhoeven (Pacific FC) and Jay Chapman (Inter Miami) Scott Arfield is a shoo-in for 2020 after posting two assists and a goal in 2019. A leader in the middle of the park, the 31-year-old was incredible against the U.S. in October and had a decent Gold Cup run, too. Soon-to-be-37-year-old Atiba Hutchinson drops down the depth chart after sitting out the Nations League campaign. Stepping above him in the pecking order is none other than CPL Player of the Year Tristan Borges. Will he see national team action in 2020?
Attacking Midfielder

On the cusp: Russell Teibert (Vancouver Whitecaps), Sergio Camargo (Cavalry FC) and Kyle Bekker (Forge FC) Jonathan Osorio holds top spot, if only just. Both Osorio and Mark-Anthony Kaye enjoyed accomplished seasons in MLS. As the incumbent, Osorio keeps his spot for the time being. Kaye’s role, meanwhile, is certainly up for discussion in Canadian soccer circles. Where do you put a potential starter like Kaye?
Right Winger

On the cusp: Nico Pasquotti (Cavalry FC), Chris Nanco (Forge FC) and Marco Bustos (Valour FC) Alphonso Davies is not a left fullback in this scenario. Cool? The Bayern Munich man is a starter at one of the biggest clubs in Europe, so his role with Canada looks certain for years and years to come. Liam Millar remains as a depth option as he develops at Liverpool. David Wotherspoon isn’t far off himself after Herdman gave him a second cap away to Cuba in the Concacaf Nations League.
Centre Forward

On the cusp: Anthony Jackson-Hamel (Montreal Impact), Easton Ongaro (Toronto FC) and Terran Campbell (Pacific FC) Canada is rich with strikers. Jonathan David takes top spot after a six-goal Gold Cup saw the 19-year-old awarded the tournament's golden boot. David’s goal-per-game run with Canada is as clinical as his club form at Gent in Belgium. Lucas Cavallini is close behind David thanks to an astounding eight goals for Canada in 2019 – including a pair against the U.S. and Mexico. If nothing else, the 26-year-old will give Herdman a selection headache in 2020, or force him to play David in a different position.
Left Winger

On the cusp: David Choinière (Forge FC) and Kris Twardek (Sligo Rovers) Cardiff City’s Junior Hoilett is another no-brainer. The Brampton, Ont., native notched his six goals and four assists for country in 2019 from both wings. Remember when he captained his side against Cuba and scored a hat trick? Elsewhere, Ballou Tabla comes in as a depth option. At 20, the Barcelona man set to be a successor to Hoilett’s reign. Here's what CPL Editorial's depth chart of 2020 looks like: 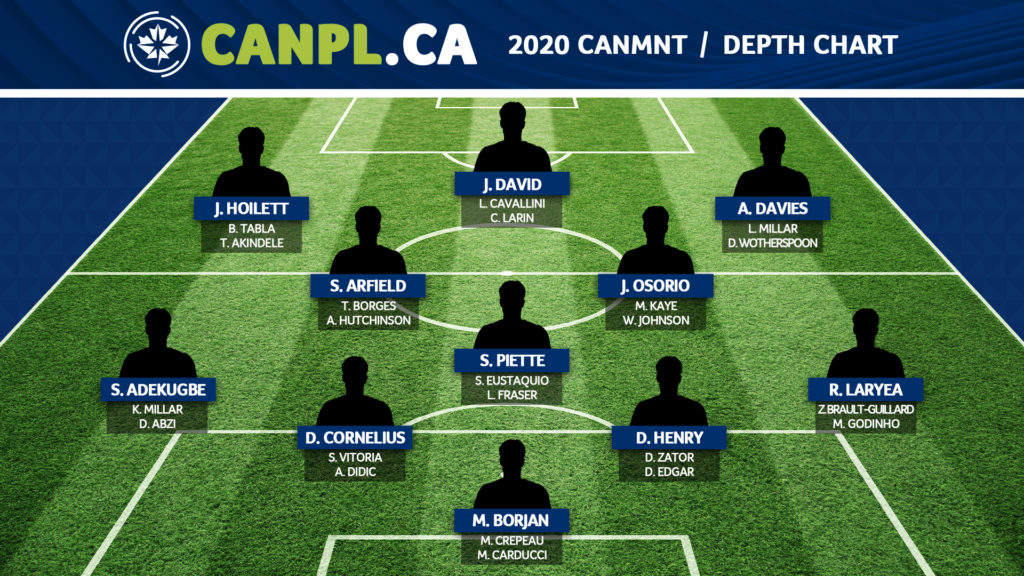