Pour lire en français, cliquez ici. Toronto, ON – (July 30, 2020) – Today, the Canadian Premier League (CPL) and official league technical provider, Macron, a leader in the international team wear market, unveils the 2020 season Away custom-designed playing kits for the Canadian Premier League eight clubs HFX Wanderers FC, Atletico Ottawa, York9 FC, Forge FC, Valour FC, FC Edmonton, Cavalry FC and Pacific FC squads. The League’s second season is no different than the inaugural season when it comes to kit design. Each kit’s look incorporates the symbolism and identity of the club within the design with a unique spin for 2020. This season all eight club Away kits focus in a new direction. Collectively all 8 “City Edition” Away kits are all black (jersey, shorts and socks) and each club jersey design is connected by a theme that is unique and special to their city identity and is distinguished by the unique stories behind the design. These kits were designed before everyone’s lives were changed by COVID-19 however, now, the design theme is even more relevant - celebrating your city and demonstrating city pride is more important than ever. The team-authentic City Edition Away jerseys by Macron are available now online for purchase for $119.99 CAD (Men’s), and $79.99 CAD (Youth). Fans will be able to customize each jersey with either their favourite player or own names and number for an additional $34.99 CAD. -30- About the Canadian Premier League Canadian Premier League (CPL) is Canada’s professional men’s soccer league that debuted on April 27, 2019. Headquartered in Toronto, ON, the Canadian Premier League features eight clubs from coast-to-coast. For updates and more information on the CPL, a league for Canadians by Canadians, visit CanPL.ca. Connect with us on Twitter: @CPLsoccer and #CanPL About Macron Macron (www.macron.com) is a leading European company in the production and sale of active sportswear, operating in four main business areas: Teamwear, sportswear and accessories for team sports (football, rugby, basketball, volleyball, baseball, handball, futsal, running); Merchandising, official kits, free time products and accessories for the supporters of the club sponsored by Macron; Run & Train, technical apparel for individual runners and for fitness; Athleisure, sports inspired apparel for leisure time, for those who wish to wear Macron outside pure sporting activities. Macron owes it success to the capacity of interpreting the needs and demands of those who do sport, developing high quality and technicality products. Media Contacts: Micki Benedetti Canadian Premier League 905-466-2575 micki.benedetti@canpl.ca Andrea Ballerini Macron Press Office Cell.: (+39)392 3132649 a.ballerini@press-office.it CANADIAN PREMIER LEAGUE 2020 MACRON CLUB CITY EDITION AWAY KITS: THE LINEUP Every jersey features the league’s mission “For Canadians, By Canadians” on the inside neck - an everyday reminder of why this league exists and to inspire our mission to grow the beautiful game of soccer in Canada. The new icon of the Italian brand, the Macron Hero characterizes and identifies the technical garments. The logo features the human body and takes inspiration from the tip of the spear, by definition a representation of dynamos and speed. The Macron Hero symbolizes even more effectively the joy at the end of the challenge, the achievement of a target, fatigue, passion and determination and epitomizes the Macron philosophy: “Work hard. Play harder”. Read more to learn more about 2020 Macron HOME Kits here and here To purchase 2020 Macron AWAY Kits, click here
Pacific FC 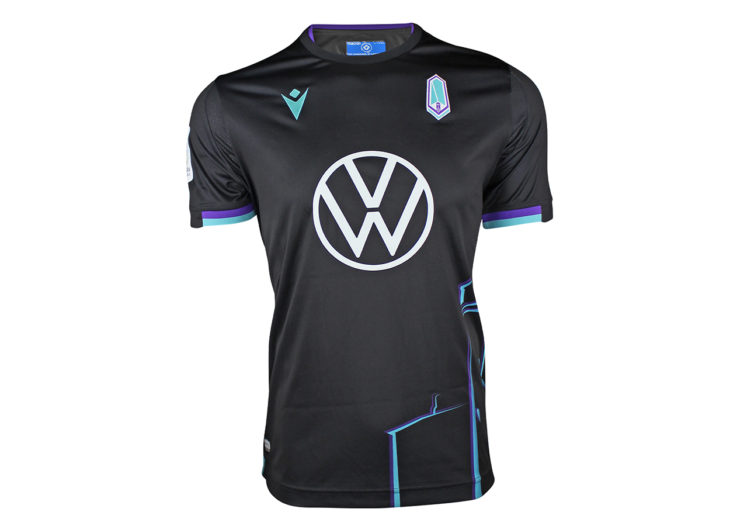 Pacific FC’s away jersey references Fisgard Lighthouse – an iconic symbol for the island and the many tourists that visit each year. Flashes club’s primary colours are incorporated throughout the design including on the back with a big Van Isle shout-out on the bottom and club pride on the back collar. Jersey Sponsor: Volkswagen
Cavalry FC 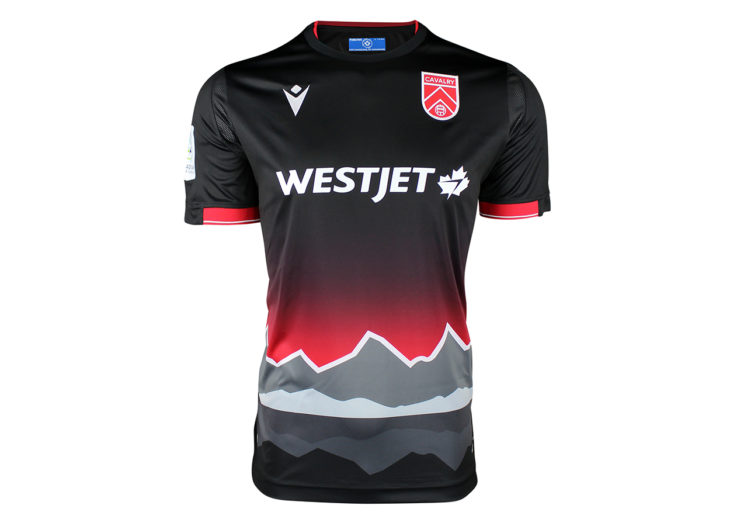 Just like the Cavs persona – The Rocky Mountains are scrappy and rugged. Cavalry FC’s jersey nods their hat in an ombre silhouette in their colours to the Rockies. The club’s bold red and white are incorporated throughout the design including on the back with a nod to their city, Calgary and club pride highlighted on the back collar. Jersey Sponsor: WestJet
FC Edmonton 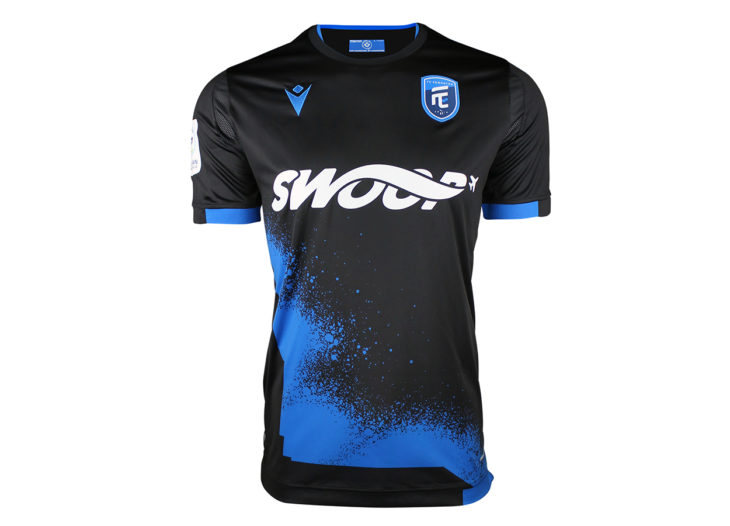 FC Edmonton features the Alberta Legislature Building sitting on the bank of the North Saskatchewan River. The building and the design focal point represents Alberta’s strength, stability and potential – just like the Eddies. Edmonton’s classic Royal Blue is incorporated through the jerseys silhouette design. No jersey is complete without a Rally Rabbit appearance who is proudly featured within the city callout on the back. Jersey Sponsor: Swoop
Valour FC 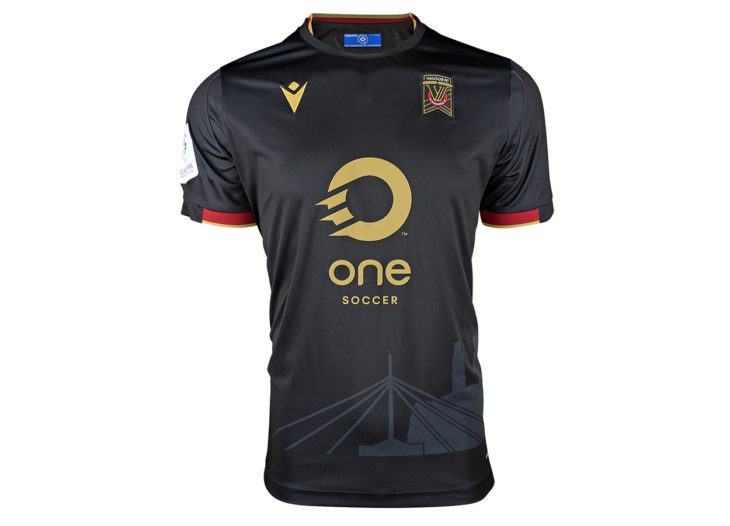 Valour FC’s Away jersey design is Inspired by the Winnipeg skyline with landmarks Provencher Bridge, Canadian Museum for Human Rights and Fort Garry Place are featured. The back of the jersey showcases Valour’s city pride with the Winnipeg shout-out in sublimated print in harvest gold. With hints of medium dark shade of red, white and harvest gold. Jersey Sponsor: OneSoccer
Forge FC 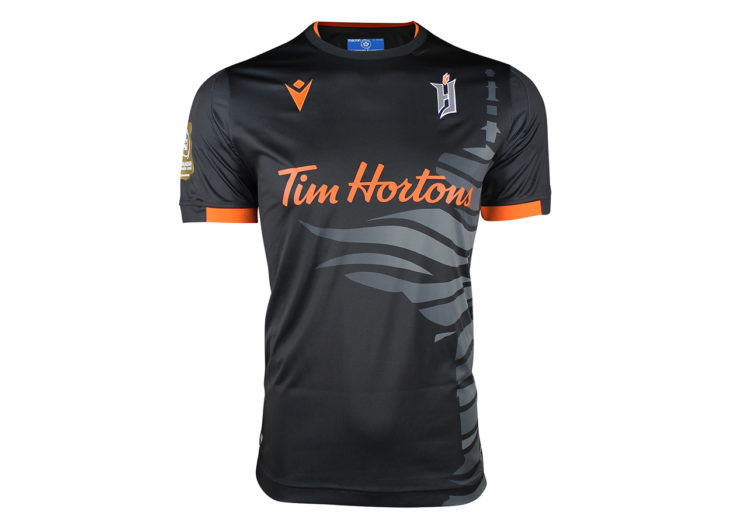 Inspired by Hamilton’s Gore Park Fountain, Forge FC’s jersey is a nod to the city’s sense of community and the diverse arts and culture movement. The city of Hamilton pride is highlighted on the back of the jersey with their iconic vibrant orange incorporated throughout the jersey details. The Canadian Premier League 2019 Champions will be sporting the Gold Champion Patch this season. Jersey Sponsor: Tim Hortons
York9 FC 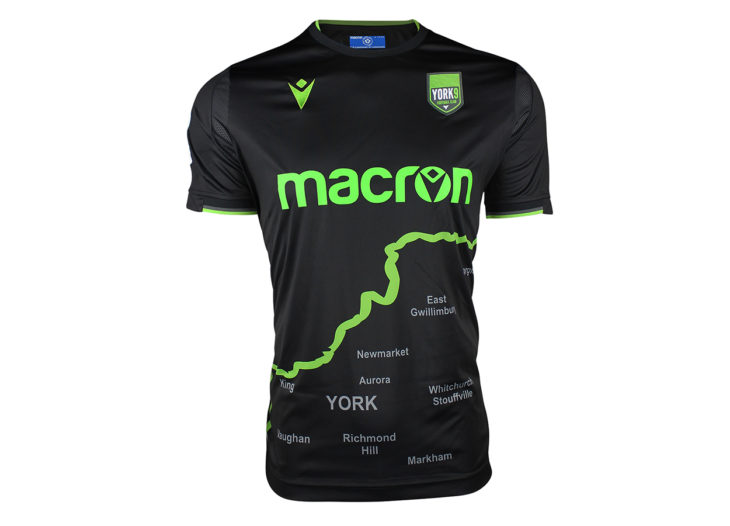 A feature that isn’t changing is the Nine Stripes representing York Region pride with a regional map featuring the nine municipalities it represents in a vibrant map capturing out the York communities. A sublimated York callout on the back of the jersey is another distinctive element featured in their recognizable green. Jersey Sponsor: Macron
Atlético Ottawa 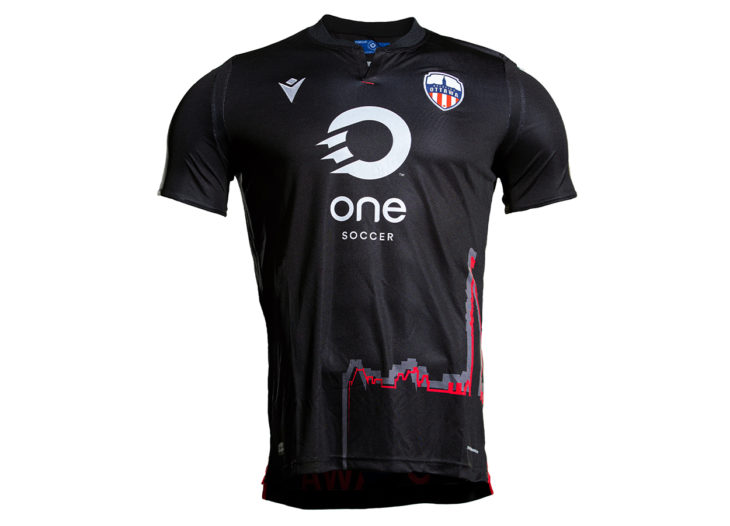 Atlético Ottawa’s Macron home jersey maintained the primary look of their parent company, Atlético Madrid in a nod to their history. The away jersey is a nod to their future, their city, the new home city – Ottawa who is proudly featured on the jersey’s back in Atlético’s bold red. Their City Edition design features the boldest statement in their market – a silhouette of Parliament Hill. Jersey Sponsor: OneSoccer
HFX Wanderers FC 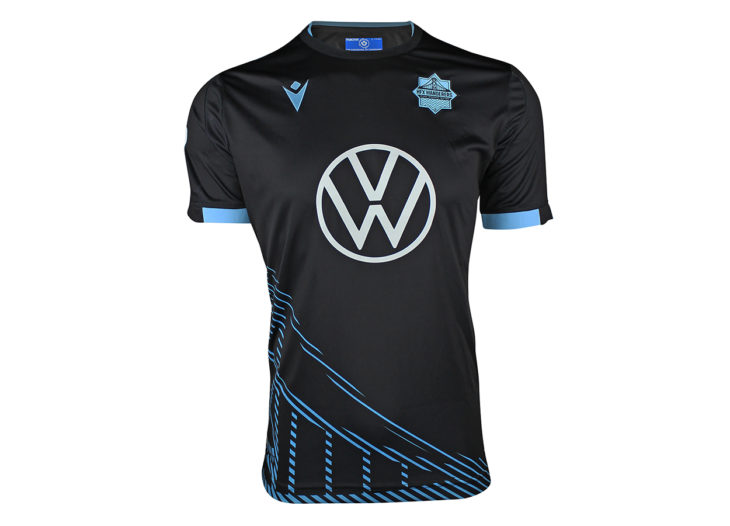 Showcasing the heart of HFX Wanderers identity the Macdonald Bridge that represents protection and shelter while standing tall and rooted in the community of Halifax – just like the Wanderers have done with their soccer community and supporters. City pride is a focal point on the back of the jersey with Halifax proudly called out. Jersey Sponsor: Volkswagen