Pacific FC Callum Irving’s double-save at The Island Games captured the most votes, as he edged out Marco Carducci of Cavalry FC and FC Edmonton’s Connor James for the honour. On the brink of stoppage time in this cagey first-round affair, Pacific faced a barrage of chances from Ottawa, including this pair of opportunities on Irving's doorstep. Ottawa’s Mohamed Kourouma took the first shot, which Irving fended off from point-blank range, and the goalkeeper was then forced to dive and push away the rebound, which had bounced off his own defender toward the goal. Unfortunately for Irving and Pacific, Atlético Ottawa did end up finding the winner, scoring off a corner kick just seconds after this save. Still, kudos to Irving for coming up big with this stop. "Allstate is very proud to support the CPL and the incredibly well-run Island Games that they hosted in 2020," shared Marcelo Regen, Vice President, Allstate Brand Innovation and Chief Customer Officer. "This was a season that truly highlighted the talents of Canadian athletes and one of the best, Callum Irving of Pacific FC, made an 89th minute save that will be talked about for a very long time. On behalf of Allstate, we are honoured to recognize Callum for a save that can only be described as 'spectacular' vs. Atlético Ottawa on September 2, 2020. We are two years into our partnership with the CPL and can already see that the talent the league has attracted is exceptionally exciting to watch. We are already excited to see what 2021 brings."

The CPL's long-awaited return to play ended up being a favourite of CPL fans, garnering the most votes in the Fan Favourite Match category. Truth be told, The Island Games’ opening match had everything. In a rematch of Finals 2019, Forge FC took on Cavalry FC in their first match in nearly 300 days, creating an end-to-end affair with goals, beautiful saves, and many dramatic moments. Dominick Zator’s 11th-minute opener for Cavalry was matched beautifully by Anthony Novak, who scored a wicked overhead kick against the run of play for Forge. A bizarre sequence that ended in Nico Pasquotti’s trademark long throw being ruled out left onlookers in awe: The CPL was back in a big way! Oh, the assist of the year winner listed below gave Forge a dramatic late lead only for a much-debated penalty decision handing Cavalry the equalizer.

Forge FC’s David Choinière has a knack for catching the eye, coming up in big games with clutch moments. This assist to Kyler Bekker did exactly that for CPL onlookers, who voted it for Fan Awards Assist of the Year. The former Montreal Impact winger tracked Bekker’s late run into the box and whipped in an inch-perfect cross, requiring his captain to simply lean into the diving header and give Forge the lead. All of this came after an excellent overlapping run after seeing teammate Mo Babouli surge forward. A brilliant one-hit cross that outdid efforts from FC Edmonton’s Antony Caceres and HFX Wanderers FC winger Alex Marshall.

A historic moment worthy of a victory, Atlético Ottawa's first goal fetched the most votes in the Fan Awards’ Best Celebration category. Mohamed Kourouma’s epic dive into Ottawa’s bench in their first-ever match against York9 FC stands as one of the more frantic celebrations in CPL history. Kourouma launched himself into a bench of his teammates who were eager to catch him – a moment that will live forever in Ottawa professional football and captured beautifully by hidden cameras near Ottawa’s part of the touchline.

As his former teammate Niko Giantsopoulos said: "Well, that’s a shot in a half." Best Under-21 Player of the Year Mo Farsi captured the El Jimador Shot of the Year honour with this second-round off-the-post effort against Pacific FC. Farsi did it all himself, pouncing on a sluggish pass out from the back by Pacific’s goalkeeper. He knocked the ball ahead for himself, took it into the box, and then rifled a shot perfectly off the far post and in from a difficult angle. It was a goal created from nothing, and a moment of magic that sealed Cavalry’s 3-1 victory to open the group stage of The Island Games. "I remember like it was yesterday – they way it hit the post, the angle. When I saw it hit the post, I swore it came across the line. The celebration was just pure emotion, just screaming," Farsi told CanPL.ca. The 20-year-old's golazo edged efforts from now-Pacific midfielder Manny Aparicio and Forge FC’s Kwame Awuah.

HFX Wanderers supporters back in Halifax won the Fan Award for Fan Moment of the Year after safe, socially-distanced watch parties took over the pitch at Wanderers Grounds. Although the team sadly wasn’t able to play in front of the raucous Kitchen at Wanderers Grounds, devoted followers of the club still managed to show their support as they inched closer to the 2020 CPL Final. The first watch party, for the Wanderers’ 2-1 win over Cavalry FC, was able to draw over 400 fans for a safe Kitchen Party under strict COVID-19 protocols. The next weekend, the club threw another watch party at their stadium as the Wanderers took on Forge FC in the CPL Final, giving fans a chance to watch their side attempt to make history together.

Another winner for the Wanderers! Goalkeeper of the Year nominee Christian Oxner took home the eCPL moment of the year with his championship-clinching goal at the Home To Play Tournament back this Spring. His do-or-die matchup against Atlético Ottawa and Malyk Hamilton proved an easy result for “The Ox.”


We Are One Community Award: CPL Players for Black Lives Matter​

Every CPL player from all eight teams took to the pitch before an Island Games match between Atlético Ottawa and Cavalry to show solidarity for BIOPIC and the Black Lives Matter movement. The pre-game demonstration was organized by the CPL players, who posted a message of solidarity with the Black community – as well as Canadian indigenous, LBGTQ, and Islamic communities – on social media earlier in the day. Another moment of silence came at the eight-minute mark of the match – 8:46 to be exact – when play officially stopped to honour George Floyd, the Minnesota man who was killed in June when a police officer held his neck to the ground for eight minutes and 46 seconds. 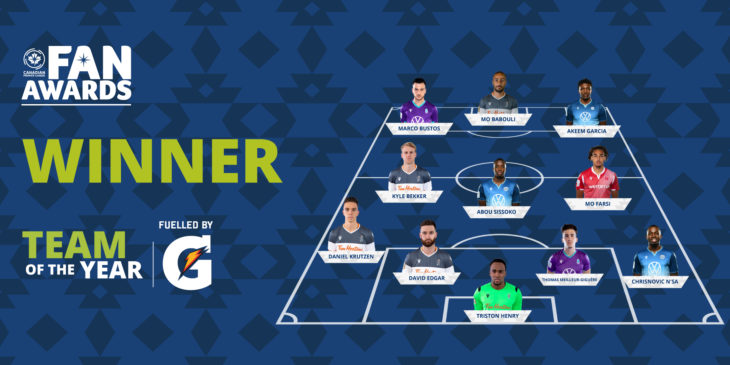