It's a tired old cliche but football is a global game. It's the crowd of customers gathered around a small TV in a barber shop in rural Spain. It's the Sunday morning parishioners in a town just outside Lisbon praying for a Sporting derby win over Benfica later that evening. It's the family and friends in the Senegalese village of Bambali glued to their screens as local kid Sadio Mané wins a Premier League title with Liverpool. It's the bunch of lifelong buddies that meet in Woodbridge, Ont. to watch the Azzurri in a World Cup game over some proper espresso. To many, the diversity of the game is a common bond that binds towns, cities, countries and communities, regardless of creed or colour. Frequently, it's lauded as a kind of superpower. That magic ingredient that seems to transcend sport and fuels a sociocultural fascination. There is a wide-eyed romanticism to how players from various backgrounds - right across the world - pull on a shirt, cross that white line and effortlessly come together as one. But the reality is vastly different. A global game has global problems. Inspired by the recent activism of the Black Lives Matter movement, seven York9 FC players felt compelled to sit and discuss their experiences of racism and discrimination. The resulting roundtable conversation - available to watch in full below - was raw, painful but educational and empowering. "I've had experiences in Germany," said Y9 midfielder Kyle Porter, who spent two seasons with Energie Cottbus between 2008 and 2010. "I've dealt with Nazi skinheads where I felt threatened for my life. At the time I couldn't quite understand what they were saying exactly until a teammate came up to me and said, 'They're calling you a monkey'. To have them throw beer bottles and garbage simply because there was three or four black players on the bus, it discouraged me from wanting to continue. "Any person of any colour can step in between those lines and perform something beautiful. And this is a beautiful game. But when you put hate, discrimination and racism into it, it becomes a war. And we're not here to fight wars." Porter, a native of Mississauga, Ont., also detailed the racism he's experienced domestically, away from the pitch. "When you leave your house, you feel like you have to check your shoulder at every moment because you don't know what's going to happen," he said. "It's happened in Canada where I show up to an establishment with my boys and it's, 'Hey, guys: your shoes. You can't come in tonight'. But it's more than that. It's the colour of our skin and them feeling threatened by our appearance. I've been pulled over countless times and considered a drug dealer." Fullback Morey Doner remembered his isolated adolescence, the racially-charged language used by his peers and the subsequent struggle with his own feelings. "I grew up in a small town," he said. "I went to school and was the only black guy. I'd get white guys coming up to me saying, 'Oh, my [n word]' and I didn't know how to react to that. I didn't have any black friends. I didn't know what was right or what was wrong. People would say, 'Pick him for the basketball team. He's black so he must be good'. I didn't know how to feel. I'd go home sometimes feeling like I didn't belong. "Now, being able to have friends of all colours and races, it's made me feel better about myself. Looking back at that time, I feel like maybe I could have handled it better. But these things make me stronger. Now that things are going on, it's something we can all talk about and all be together on." Trinidad and Tobago international Ryan Telfer praised Canada's diversity of Canada but he also recalled moments of discrimination and racial profiling. "You see it here every day, everybody coming together and it's not a problem," he began. "For me, when you're by yourself and maybe in a different neighbourhood, all of a sudden the entire scenario changes. People are looking out their windows, looking at you like you're not from Canada. Like you're an alien or something. I just found it surprising. The things you hear about Canada, especially Toronto, and how multicultural it is and how accepting it is of every kind." "It's really eye-opening to see there's an opposing factor towards that. There are people actually fighting against that. I don't know what it's going to take for everyone to realize we're made of flesh and bones, that we have the same blood in our veins. It's not about the pigment of your skin. The main thing is that people keep coming together until the hate is eventually gone. It's something I pray and hope for every single day." 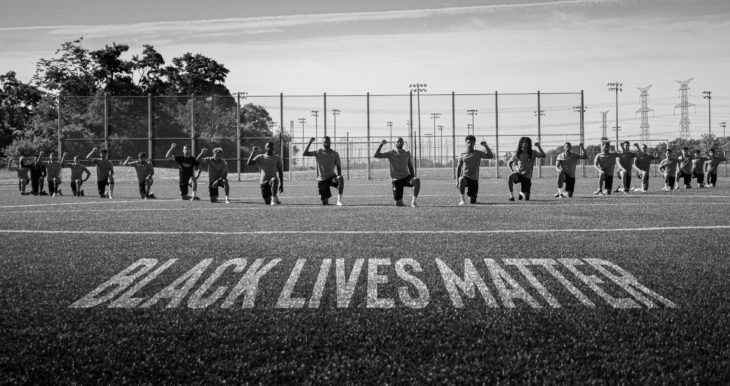