Pour lire en français, cliquez ici. Ottawa, ON (March 5, 2020) - Canadian midfielder Antoine Coupland was announced today as an addition to Atlético Ottawa’s roster. Last year, at 15 years of age, Coupland became the youngest player in Ottawa Fury’s history to be signed for the club after just graduating from Ottawa’s St. Anthony soccer club's Futuro Soccer Academy. Coupland is a left-footed midfielder who is very comfortable with the ball at his feet and who likes to directly take on defenders. He was offered a trial by English club Sheffield United, but decided to sign with the Fury instead last July. “Having Antoine join Atlético Ottawa is exciting,” said club CEO Fernando Lopez. “He is a young talent with incredible potential. Having made his professional debut at the age of 15 is a testament to his passion and drive for the game and we are looking forward to working with him to develop his talent.” The 5-5, native of Chelsea, Quebec who calls Ottawa-Gatineau region his home made three appearances for the Ottawa Fury in 2019 who has plans to continue to grow and develop his skills with the hopes of playing international both for Canada and professionally one day. 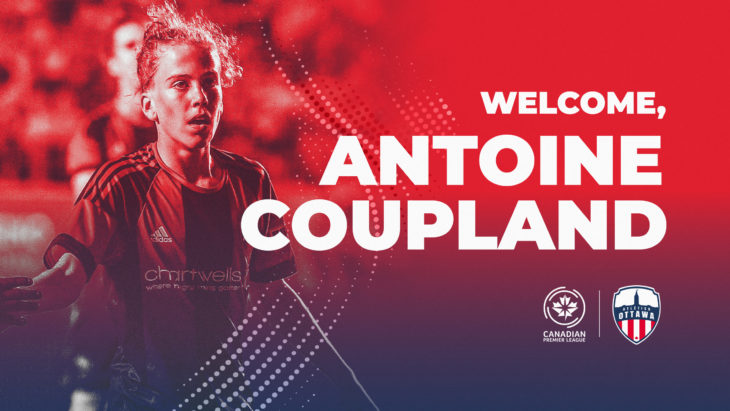 “I am really excited to be able to continue my professional soccer career with Atlético Ottawa,” said Coupland. “Being part of the Canadian Premier League and getting the opportunity to play in Ottawa in front of fans, my friends and family from the Ottawa-Gatineau region is exciting. I am looking forward to getting the opportunity to grow and develop under Coach Mista and am proud to be part of such an established organization like Atletico.” Atlético Ottawa will begin play on the road against 2019 Champions Forge FC on Saturday, April 18 and will face off against HFX Wanderers at home (TD Place) on Saturday May 16, 2020. Link to full schedule: Atlético Ottawa To learn more about the Canadian Premier League’s 8th Club follow @AtletiOttawa on Facebook and Instagram and @Atleti_Ottawa on Twitter. For information Atlético on tickets for the 2020 season, please visit: https://atleticoottawa.canpl.ca/2020-season-tickets/ -30- Full Name: Antoine Coupland Age: 16 Position: Midfielder Height: 5’5” Birth Date: December 12, 2003 Birthplace: Chelsea, Quebec Nationality: Canadian Last Club: Ottawa Fury