Ottawa, ON, March 28, 2022 – Spring has sprung, and with it, the return of professional soccer in Ottawa. Atlético Ottawa announced the return of its popular ‘Pay What You Can’ offer for the first home match of 2022 set for Saturday, April 9th, with all proceeds going directly to humanitarian assistance in Ukraine. 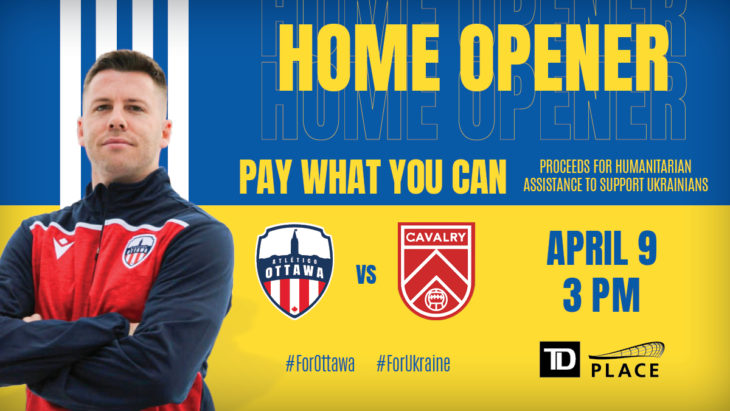 Atlético Ottawa President and Strategic Partner Jeff Hunt, joined by Ottawa Mayor Jim Watson and Andrii Bukvych, Chargé d'Affaires at the Ukrainian Embassy, made the announcement at a press conference on Monday. The ‘Pay What You Can’ offer was a celebrated success last season, seeing over 12,000 fans attend the club’s first-ever home match at TD Place, and Hunt believes this appealing offer combined with a time-relevant and community-building outreach could see the crowd surpass previous records. “Ottawa has a strong history of coming together to support those in need,” Hunt pointed out. “Our community has done that in spades already. With this match, we want to encourage them to extend a helping hand, join us in celebrating the strength and resilience of the people of Ukraine, and get rewarded with a thrilling soccer match to boot.” Proceeds of the tickets sales will be donated to the Ministry of Social Policy for Ukraine special funds for humanitarian assistance and will be used to meet food needs and accommodate refugees and citizens of Ukraine who left their homes due to the hostilities. It will also go to provide them with clothing and footwear, medicines, and medical equipment, as well as providing the Ukrainian population with necessities, one-time financial assistance, and meet other priority human needs. “I'm proud to support Atlético Ottawa's generous initiative that will directly assist the Ukrainian government as well as refugees that have been displaced to Ottawa due to the ongoing war in their country,” offered City of Ottawa Mayor Jim Watson. “Ottawa is home to a large Ukrainian-Canadian community, and this important fundraiser at Atléti's home opener will allow the city to gather and celebrate Ukrainian culture and the strength of its brave people.” In addition to the funds collected through the sales of tickets, Atlético Ottawa will be sporting a special tribute jersey for the match, donning the traditional colours of Ukraine, with the jerseys being auctioned off online, via The Ukrainian Canadian Professional and Business Association of Ottawa, following the match. 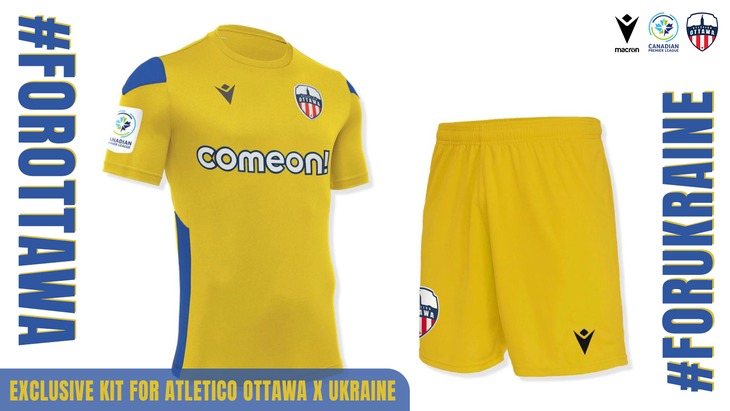 The April 9th ATO x Ukraine match will be the club’s first match in 2022, technically its third year of existence but first full-length Canadian Premier League campaign. With a new head coach at the helm and a perfectly crafted mix of seasoned players and youth, expectations are high for success and anticipation building ahead of the initial kickoff. Tickets for the match, and the entire 14-match home schedule, are available HERE. Fans wishing to make an additional donation can do so online via the National Bank of Ukraine.